When I actually have had the opportunity to see my own website, it hasn’t gone past me that the last time I posted anything was six days ago.  Considering the earnest effort I’ve put into being a somewhat consistent brogger, six days is a fairly considerable length of time, given the fact that in the old iteration of things, I used to mostly post maybe once a month in the worst of times.

The simple fact has been that I’ve been busy working.  Which, given the current state of me, is a very good thing; long story short, I’m pretty hurting right now in the wallet.  A dry spell on the freelance front, as well as yet another change of the mortgage lender (and their subsequent payment policies) has me playing a lot closer to the heart than I have done in over two years.  So, I’m not complaining that I’ve turned in a solid 41-hour work week, and am going to do as many hours as I can this week, even with Dragon-con looming ahead this weekend, even if it more or less means that I haven’t had much time to keep up with my writing.

When I haven’t been working, I haven’t really done a whole lot since last week.  It’s more or less been the same old on a regular basis – wake up, run, lift weights, shower, eat cereal, go to work, work, come home, eat dinner, play Left 4 Dead, go to bed.  Every now and then, I’ve watched some baseball, or watched some other show, but not a whole lot else.  What can I say, I’ve been boring lately; given the financial woes, I’m finding it best to be a little dormant.

But anyway, since I had a somewhat passable time last year, I’m actually looking forward to Dragon-con this year.  Like last year, more or less plan on showing up to the convention in the evenings, and loitering around the lobby of the Marriott.  I will likely do a good bit of drinking out of a glass boot, possibly carry around a wrestling title belt, and hope to see some familiar faces, friends, acquaintances, Miranda Lawsons, Jill Valentines, Kelly Chambers, other hot chicks, and funny costumes that remind me of my childhood and/or better times.

Hopefully, as things settle down after the convention and this work schedule, I will get back to doing some more regular writing; admittedly, I have a few ideas of things I’d like to write, but just can’t quite seem the time to make things work.  If and when things get worse financially, there are bound to be thousands of words to be unleashed when I go into full financial stay-at-home lockdown mode.  But until then, it’s back to being busy, poorly multi-tasking, being social and shit, and not writing.

It wasn’t one of the 13 remaining MLB parks, but minor league joints also count for Real Men Don’t Wear Small.  I actually take a bit of pride in including the minor league parks, because it’s at these small, intimate houses of baseball, can a lot of good be witnessed, on and off the field, from the rising young stud players of tomorrow, strange and delicious food creations, and sometimes the joy found in the humor of funny names.  So with that in mind, the newest addition to Real Men Don’t Wear Small, is PGE Park, the home of the Portland Beavers. 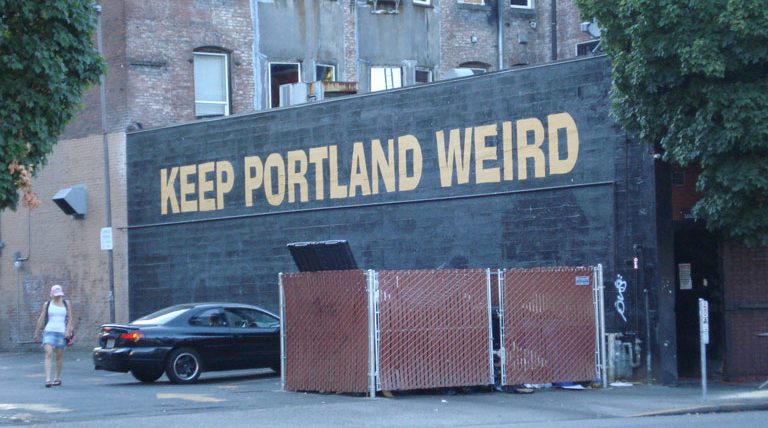 On Monday last week, I hopped on a plane, and flew across the country to Portland, Oregon.  The reasoning was pretty simple – I wanted to see a baseball game.  The team was The Portland Beavers, which are a minor league affiliate of the San Diego Padres, and their home park, PGE Park is regarded as one of the nicest parks in the minor league ball circuit.

There isn’t a whole lot of explanation necessary to why I would exert so much effort in flying across the country in order to see a minor league team called “the Beavers.”  I am, admittedly, a big kid at heart, and I snicker every time I say, or someone else says “the Portland Beavers.”  The 14-year old in me demanded that this trip come to pass, and pass it did.  But most importantly was the fact that the 2010 season is the last year for the Beavers, and after it’s over, their park is being converted into a full-time soccer stadium for a fucking Major League Soccer team (The Portland Timbers . . . lame), and the Beavers are more or less being kicked out of town, and leaving the name behind in the process.  So it boiled down to a now-or-never scenario, to where if I didn’t make the trip on Monday, there would be no seeing any (baseball) Beavers, ever in my life.

The Beavers more or less gave me a convenient excuse to ever want to go to the state of Oregon, a state that I had never been to, in my entire life, and never really had any reason to until recently.  I had a fairly eventful time out in Portland aside from just the baseball game itself, and I’m glad that I made the trip, even if I did get stranded at the airport, and have to shell out the money that I don’t necessarily have to pay for a motel for four hours.  I look back at the experience fondly, and feel little regret that a trip with immature motivations, and for a minor league ballpark wound up being the furthest traveled, most expensive, and (planned) shortest baseball road trip I made this season.

END_OF_DOCUMENT_TOKEN_TO_BE_REPLACED 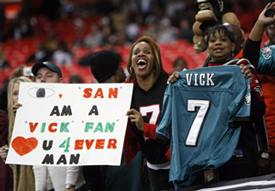 At first, I saw him at an arts store.  Mid-50s, black guy.  Wearing a Michael Vick Philadelphia Eagles jersey.  I felt disgust, but let it slide.

Then I saw the exact same black guy at Home Depot down the road, just minutes later, and then I felt like it was a sign that I had to write about it.

Simply put, the headline says it all; I will never understand how Michael Vick still has fans.  The guy brutalized and essentially murdered dogs.  How can anyone be a fan of that?

END_OF_DOCUMENT_TOKEN_TO_BE_REPLACED

As I mentioned on Monday, I went to Portland, Oregon on a whim.  Simply put, I wanted to see the Portland Beavers minor league baseball team, at their own place, PGE Park, before the season ended, and Monday was the only plausible game that I could have a chance to make it to.  Fly in the morning, take advantage of the time change, watch baseball, wander around the city for a few hours, take red-eye flight back home.  Everything went exactly as planned . . . except for that last part.  I guess it’s not a baseball season until I get stuck somewhere far the fuck away from home at least once.  I think I’m really going to reconsider standby flying when it comes to the West Coast for future reference.  But it was still an awesome trip.  I’ll probably write more about it later on when I finish up my backlog of things I want to write about.

END_OF_DOCUMENT_TOKEN_TO_BE_REPLACED

I really think there are actual squatters living in the foreclosed home two houses down from mine. They’re often outside, to the point where they’re putting benches underneath shady trees to get reprieve from the sun, and one of them is always on his laptop outside, like he’s leeching off of someone’s WiFi. The lights are never on inside the house, and the state of the plumbing is definitely questionable. More than a few times, I have jogged by the home, with the alarm system being audible, since they run on auxiliary power. I’m not exactly sure what protocol is with this kind of situation, calling the HOA is useless since Zombieland’s HOA is about as competent as a quadriplegic track star, so I’m actually thinking about calling the cops at some point. Is that even logical? 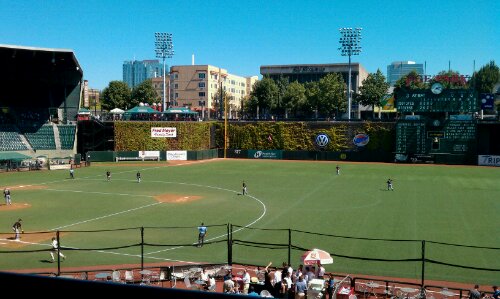 Don’t ask me why, but I’m posting from Portland, Oregon, and I’m at a minor league baseball game. Details will come later.