Here comes the annual, regression of Halloween post:  Despite recent events, I don’t wish to let it really impact the way in which I live life.  That being said, I still partied for Halloween, and on actual Halloween night, I would still be a willing participant in facilitating trick-or-treaters.  Incapacitated front door be damned, it was agreed that myself, Jen and Tom would hang out up front and hand out candy to the children of the neighborhood, despite the fact that many of them were predicted to be teen punks in no costume at all, just doing it for the candy.  It was still tradition, that was something done when I was a kid all the way up to my sophomore year in high school, and now that I am a “grown-up” homeowner, something that I would give back to the current generation of children.

The first trick-or-treaters came around maybe 7:20-ish, but I wasn’t really paying any attention.  Tom’s zombie costume did a great job of scaring most all the kids that actually did come by, made one cry, and literally made at least six kids run away, and require assistance from parents to give them courage.  But the gaps in between the groups of trick-or-treaters were gigantic, and as predicted, there were a good bit of kids who simply didn’t even try; but to be fair, not nearly as much as I predicted.  But despite the lazy kids / overprotective parents who drive their kids door-to-door instead of walking like it was done when I was their age, and the impressive, albeit impromptu presentation of our house, we gave candy to at most, 40 kids.  By 8:45 p.m., the sounds of children were nowhere to be heard, and we closed the book on trick-or-treating for this year.

I know times have changed, the world is a little bit more paranoid and scared of everyone else, and there are legitimate psychopaths out there that do ruin it for everyone else, but I have to err on the side that there are still a good bit of decent people out there that still get in the spirit of this transitional holiday to Christmas.  If Halloween and trick-or-treating becomes a thing of the past, I think I’d legitimately be sorrowful for it’s once great tradition.  Waiting for the sun to set, trick or treating from 6:30 to 9:30, and walking several miles with friends, and earning an entire pillowcase full of candy.  Running into peers and sharing information on where the best candies or showmanship houses were, and legitimately embracing the scary houses, costumes, and traditions of the night.

Maybe it’s where I live, where pretty much, myself included now, everyone’s home has been attempted to have been broken into at some point, but it just feels like a once-great time-honored tradition is slipping away.

Allison, dressed as Claire Redfield, shooting whom I guess is Tarzan at the Center Stage Halloween party with Pervy-Aladdin in the background trying to get his mack on with two mobster chicks.  This is also the 10,000th photograph taken on the camera I’ve probably used the longest.  Just noticed the odd way my most recent camera dump ordered the photos, and realized that the numeric order of the photos had reset after the first 9,999 photos taken.  Makes for good brogging material, too.

I couldn’t sleep well last night, for obvious reasons.  Every time I closed my eyes, the scene replayed itself in my head, from the time I heard the loud kick of the front door, to when I saw the two perpetrators making a run for it.  It jumbled around in my head repeatedly, and alternate scenarios presented itself, making my mind race when all I really wanted was to put the day behind me.  What if they didn’t run?  What if they were armed?  What if I were armed?  Fairly certain if were the latter scenario, there would be at least one dead black guy, considering the speed in which they “got away” was with the urgency of a DMV employee.  Regardless of what was going on in my head, I couldn’t help but feel my heart racing a little bit throughout the A.M. hours.

Sure, it is fortunate that nothing was stolen, nobody’s hurt, and the fucks were caught, but what really sucks right now are the feeling of solitude I’m feeling right now.  More so, than ever.

“Robbery” was the third thought that passed through my head. When I first heard the sound, my first thought was what the cats knocked down that could make such a loud thud. As I rushed out of my bedroom, the second thought was something big had hit the outside of my house. Now that thought was partially true, because in the micro-seconds in which I was darting down the upstairs hallway to where I turned the corner and saw the open front door, is when I thought “robbery,” and the reality hit me, when I saw the first black guy run out the door, and then the next, and I was screaming at them to get the fuck out of my house.

Long story short: dumb fuckfaces ran off to a piece of shit 1992 Toyota Corolla sedan, which goes 0-60 in like 30 minutes, so I had more than enough time to get the plates, and within two minutes was on the phone with 911 where I reported the attempted break-in, the plates, and big surprise, it was a stolen car. Cop comes, interviews me, surveys scene, leaves. I tell Jen, cop comes back, asks me to escort him to where they got the two worthless assholes. Neighbor who apparently saw the shitheads trolling slash scouting around the neighborhood joins us, as a witness, as he saw the car doing its best impression of a getaway, which means yes, the stupid motherfuckers actually did attempt a break in within sight of a bystander. Collectively, we go to the scene of the arrest, and confirm that the arrested perps were indeed the two hoodrats that were attempted to break in to my house.

But now I’ve got a broken door frame, less than effective front door, and admittedly, some rattled nerves and a whole lot of pent up rage, anxiety, and stress. Curious if the cost of the home insurance deductible will be worth paying versus paying out of pocket for door repairs. Curious to know how long the justice system will take before I get just compensation for the failed crime. Curious to know if I’m more mentally wounded than I think I am.

But today, I’m glad that I’m not working.

My name is Patrick Bateman. I’m 27 years old. I believe in taking care of myself and a balanced diet and rigorous exercise routine. In the morning if my face is a little puffy I’ll put on an ice pack while doing stomach crunches. I can do 1000 now. After I remove the ice pack I use a deep pore cleanser lotion. In the shower I use a water activated gel cleanser, then a honey almond body scrub, and on the face an exfoliating gel scrub. Then I apply an herb-mint facial mask which I leave on for 10 minutes while I prepare the rest of my routine. I always use an after shave lotion with little or no alcohol, because alcohol dries your face out and makes you look older. Then moisturizer, then an anti-aging eye balm followed by a final moisturizing protective lotion.

I’m 28 years old.  I know I’m comparing myself to a fictional character who’s own reality is in question, but shit, remembering lines like that don’t help make me feel like I’m not quite doing something right with my own life. 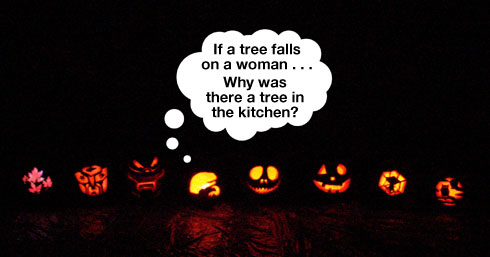 Sometimes, without tradition, then we’d have nothing to ever really look forward to.  In spirit of Halloween is once again the annual pumpkin carving party held at Allison and Stuart’s place.  A fun occasion marked with cutting up pumpkins, real and fake, good food, company, and lots of spirited conversation about swingers and cougars, and puzzle video games.