I actually like this commercial.  Guy sees something he really likes and wants, and does what more people should do in order to attain their desires – work for it.  He busts his ass doing all the things nobody else wants to do, and in the end, surpasses his goal and is ultimately capable of buying two Jettas.  Feel good story of a year.

But it got me thinking – given my own financial woes, and the fact that I have a tendency to get mind-numbingly bored from time to time, that I would be more than capable of doing some of the things this guy does in the commercial, in order to supplement some additional income on the side for my own needs.  If it paid somewhat reasonable to off-set the cost of transportation, I’d gladly take ass-kickings from people while in pads, or walk dogs, or other odd jobs that don’t involve me having to deal directly with “customers,” are short periods at a time, and pay in cash under the table.  I don’t think I’d want to be the guy at the corner of Ponce and Monroe dressed as Uncle Sam, schilling for tax prep businesses, be the hot dog guy, or do nude modeling, but there are other random odd jobs I’d be willing to do for some side cash.

Maybe it’s because I’m not in San Francisco, or any other hippie/white/liberal community that would have random sheets of paper with tear-strips advertising one-off jobs on the fly, but at least in the Atlanta area, any tear sheets involve people trying to sell services so that they can make money, or support groups of some sort.  Dog walking is now done through official agencies, or “professional” walkers, and it seems like the ability to get odd jobs is now dependent on the cliched “who you know” kind of mentality.

Much like the mom ‘n pop industries were more or less decimated by the evolution of Wal-Marts and other superstores, the odd job culture seems to have been destroyed by society, and the incorporation of small businesses turning common, small labor into work hoarding and essentially, pimping. 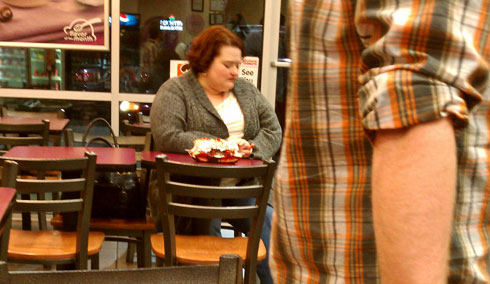 Such a common metaphor, yet I can’t really say that I’ve seen it in complete harmony in person all that frequently.  I know I’m a dirty swine for posting it, but it’s not like I get a bajillion hits from the anonymous world.

As a kid, I never really liked Sundays.  Sure, Sundays were technically a part of the weekend, but in all honesty, they’ve always had a symbolism for the ending that nobody wants.  As far as I’m concerned, the “weekend” is technically whatever hours you have after working on a Friday, and Saturday.  Sunday’s greatest luxury is the fact that, for the non-church going heathens like me, is that it is a day of sleeping in.  Otherwise, the rest of the Sunday is spent with this feeling of a clock counting down knowing that the next day is a day of work, and that if you’re responsible, you end your day and go to bed at a time accordingly.

When I was a kid, Sundays were spent inconveniently getting up earlier than I would have wanted in order to go to Catholic church, suffering through religious “learnings” and then coming home to dinner, and for some reason, I’m remembering a television medley consisting of shows such as Parker Lewis, Can’t Lose, In Living Color, America’s Funniest Home Videos, The Simpsons, and some show on Nickelodeon.  But in the back of my mind, I knew I had to go to bed early, because tomorrow, was school.

Not a whole lot has changed, really.  I slept in as much as I could, barely hitting eight hours.  But in the back of my mind, I know that I have to sleep at a reasonable time, since I have to work in the morning.  No soothing Dunkin’ Donuts coffee to take the edge off on all this early-evening fatigue, because it’s going to keep me up all night.  No zbs until 1 a.m. otherwise, I’m going to snooze four times and not have adequate time to Superman Banana before work.  And right now, I’m brogging while I’m waiting for my turn to sit down and get in the squared circle with IRS.  As it’s been the case the last few years, I’m probably going to owe money that I don’t really have right now.  But at least it’ll be out of the way nice and early, and I can sit back and smugly watch people panic and the news exacerbate how epidemic tax season is.

But really, Sundays kinda suck.  Whomever concepted the five-day, 40-hour work week needs to have their grave(s) dug up, corpse(s) desecrated, and mixed into candy that those crazy killer homicidal kids in Hostel from Bratislava would eat.  In a much more adequate world, the weekends would be Saturday and Sunday, completely free and open, and Mondays allowing for reasonable sleeping in, and working “whatever you can do is fine.”

But Hispanic has never been one of them. When I was 17 and had shoulder length, mostly blond hair, I was once mistaken for a woman (despite standing in front of a urinal at the time). When I lived in Harrisonburg, where nobody knew what a Korean was, I was once actually called black.  While lunching in downtown Toronto during the film festival, someone once thought I was a particular director that I had never heard of.

But today, while I was out jogging, I was passed some little kids who were all mesmerized by the not-black person, apparently training to burglarize in broad daylight.  Couldn’t have been any older than maybe eight years old.  As we reached the range of earshot, one of them says to me “hola,” and not in the “I’m using Spanish because it’s cool” kind of way, but in the “I think this guy is Spanish” kind of way.  I acknowledged him with a nod, and kept jogging.

Mistaken for a Spanish person.  There’s a first for everything.  Silly batarians.

Seriously.  I work out and take other measures to ensure that I can be as healthy as can be, but I’d rather my efforts not be derailed by some asshole in the cube over who is coughing openly, repeatedly, and far too frequently, who is obviously working while still not truly remotely close to 80%.

I swear to god if I get sick because of this carrier, I’m going to rub my balls all over all of his stupid Godzilla toys in his stupid cube when he’s not around. 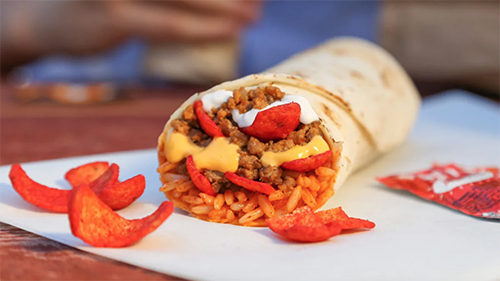 In light of all the heat that Taco Bell is under for the allegations that their “beef” isn’t really 100% completely beef, all I really have to say is, who cares?

I will continue to eat Taco Bell food as I see fit, because I simply like Taco Bell food.  I don’t give a shit if it’s not 100% beef, as it’s debatable to the authenticity of any foods not prepared by yourself, since you don’t know what’s going on behind the doors of the kitchens of the world.  But most importantly, I find Taco Bell food tasty, and as the title says, I don’t really care if they secretly have been using ground human cadaver to fill the gaps in the meat, because I’d still continue to eat it.  In fact, I’d probably eat more, to assert my position as higher on the food chain than the typical human being.

The best part of this whole debacle is that reading about it on the internet, the hordes of the morally self-superior are out in droves, detesting Taco Bell, and the fast food industry as if their own bodies were Edens or Utopias of their own accord.  How they think they’re so above legitimate business and those who like occasional fast food, in favor for all their bullshit beliefs and opinions.  Yet, if even just half of these hypocrites are the stereotypical smarmy internet commenters, than they’re also the ones craving a gordita when they’ve been out drinking wine or PBR with their snooty friends, smoking cloves or pot, and probably doing far worse to their own bodies than I am by indulging in a beefy crunch burrito once or twice a week.

What do Taco Bell and Chick-Fil-A have in common?  They’re both fast food.  Yet CFA is seemingly absolved of doing any harm despite being crazy religious cultists that produce some magnificent chicken products, but Taco Bell is the anti-christ because of allegations confirming what everyone’s already aware of – that their beef isn’t really 100% beef.

Bunch of fuckin’ hypocrites, everyone.  I’m totally going to get a beefy crunch burrito tomorrow.  I crave this, beef or no beef.  I’ll imagine it to be human meat, and enjoy it further while I sink my teeth into it.

For the third time in the last fifteen months, I have been told that I “am overqualified” for a potential position.  If this is a valid excuse, it means that the companies telling me this simply don’t want to pay for my amount of money they think I’m seeking.  But I also suspect that this is also a nice way that they think they’re letting me down, so that I feel all good and nice that I’m too good for them.  Perhaps I might be overqualified for the positions that I’m ultimately being rejected for, but honestly, I’m aware of what I’m applying for when I do it, and I know I’m not going to be making giant money with some of these jobs.  But if I’m not qualified for a position, and they’re telling me I am, I’d rather hear the fucking truth.

Today, while bored at work, I stumbled upon an article linked from Fark about slammed cars.  While reading through the article, I couldn’t help but notice that much of the imagery, were all JPEGs that I’d seen before. Subsequently, much of the content seemed to be precariously similar, obviously re-written, but not a far stretch from the original sources.

A good bit of the content here was funnier eleven years ago when it was originally posted on riceboypage.com

Both times I submitted the comment, it was deleted, almost immediately.  If that doesn’t acknowledge a hint of guilt, I don’t know what does.  Ain’t censorship a wonderful thing?  Fuck [website redacted].*  Their shit isn’t really that funny, and they produce more incessant, unfunny lists to inspire reminiscing than the E! network.

*they’re not worth giving any plug to.