Oh please, go an entire BHM without bringing this up?

As I mentioned, I recently just “upgraded” my primary machine to Windows 7, since my netbook is running it, I like it, and want to be running it on my PC.  I guess it’s supposedly a little safer to be running, since as it was so astutely pointed out to me, Windows XP has been around so long that there are fucking Shaolin Jedi Hacking Masters who have perfected the art of fucking up XP users with their clever trojans, viruses, malwares, and in my case, rootkits.  Anyway, the sheer volume of time consumed to backing all my shit up, auditing my entire system of needs, wants, and can go’s, and loading up the new operating system, the last thing I ever thought was going to give me any issues was integration of my monitor to the new OS.

It turns out that despite being less than five years old, my model of Samsung monitor is apparently no longer supported by Samsung itself.  They do not have any drivers available for this monitor beyond Windows XP.  So for the longest time, I was running my machine in a bastardized stretched to 16:9 version of 1298 x 1024, which was absolutely horrendous.  I’ve called Samsung and just recently sent them an informative e-mail describing my plight, but the bottom line is that neither is going to get any drivers magically whipped up for me in the next 24 hours.

My brother then pointed out that I probably had an incorrect VGA adapter, and lo and behold, it’s the generic old Standard Graphics VGA Driver; supposedly tracking down the original graphics adapters should alleviate the meat of the problem, and at least allow me to get back to the 1680 x 1050 I’ve grown so accustomed to running.  So I track down the old graphics drivers, download, and install them.  An error hits immediately, but hey, Windows 7 is all friendly and shit, and re-installs it “with recommended settings,” and bam, the drivers are installed.  Restart and reconfigure later, and now I’m allowed to use a 1600 x 1200 resolution.  Not quite correct, but it’s slightly better, I’m sure there’s just an issue with integration between VGA and monitor.

Long story short, Sony’s own website states that my machine just wasn’t made to run Windows 7 or Vista, and subsequently there are no drivers available for anything not running XP.  So now, even if I did go out and get a new monitor, it apparently wouldn’t have mattered, because there are no legitimate drivers out there that would support it, because I’m now running Windows 7.

I thought Windows 7 was supposed to be the seamless pinnacle of Windows operating systems.  Considering it loaded effortlessly onto my netbook, my much older laptop, as well as Jen’s laptop, I didn’t realize it was going to give me as much grief as if I were trying to be running fucking Ubuntu here.  Seriously, at this point, I’m pretty much at a complete loss.  I’d rather not have to start all over again, and go back to Windows XP, but I’m, as hard as it to believe for some nowadays, an artist too, and what I see on the screen is vitally important to my career and livelihood, and XP might be the only chance at salvation.  Man, I fucking hate computers.

Yesterday, my computer was infected with the mother of all AIDS and took me many many hours to alleviate.  Regardless of its supposed cleared status right now, I am contemplating backing all my shit up and completely reloading this machine, this time to Windows 7.  Conclusively, this has laid down the ground work for what’s so far been a lousy weekend.

I have not yet received my copy of the Atlanta Braves annual that I contributed to despite being promised a copy once it hit news stands, which it has today.  Response has been positive from those not cheap enough to talk the talk and actually buy one, and those educated enough to actually want to purchase one.  Given the fact that I’m one of the authors of the book itself, I’m anticipating it greatly, and regardless of the fact that I am going to be getting a free copy … eventually, I’m very tempted to cash in a Borders coupon and going to buy one so I can just have one on my terms.

I have a headache that I can’t seem to shake, even two aspirins and caffeine in.  I’m also in the mindset that is in a state of perpetual agitation, since I haven’t worked in the last three days of the week, and I’m coming to the realization that no matter how hard I try to with my talent agency, without my ace in the hole, I can’t seem to get any gainful work out of them.  Subsequently, as a result of the negative state of mind, I happen to think the world is full of uneducated, ADD-minded simpletons who rather communicate in 140 characters or less about trivial shit, than enlighten and educate themselves on something with substance.

Traveling sounds like it would’ve been a good idea this weekend, but I don’t know where to travel to anymore these days.  I wish I knew more people in places that are easy-to-access Delta hub regions, where I could fly easily and fairly inexpensively to on a whim, because frankly, I just don’t really feel like being home right now, and the lack of working sort of puts the handcuffs on my spending habits to excess.

There are so many of these “dog eats with hands” videos out there, but this is simply the best one. It’s all about presentation, manners, and etiquette.

I swear, this Edge brand shaving cream smells just like thin mints. And I swear to god, while shaving, the aroma it gives off just underneath my nostrils makes me want to do nothing more than consume an entire tube of thin mint cookies. It’s baffling just how delicious this stuff smells. I look forward to shaving due to the aromatic pleasure it provides.

I’d be lying if I wasn’t pushed to the point where I had to dip the tip of my tongue into a tiny smudge of this stuff. And to no surprise, it doesn’t taste anything close to a thin mint.

Regardless, after I polish off the remaining thin mints I have left, I need to get my ass to a Kroger or something where they’ll have some girl scout cookies for sale, and buy like fifty boxes of thin mints. And Samoas. 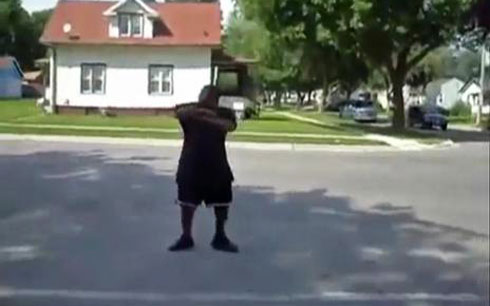 Oh no, I haven’t forgotten about Black History Month.  I’ve just had several other things occupying my time and writing fulfillments recently, and to be honest, I haven’t been agitated recently to where I’d want to verbally retaliate.  Until yesterday.  It’s bad enough that yesterday was my last day at my previous assignment, that I had to turn down work because it was going to cockblock my chances to get in with a company I really want to get with, but on my way home from work, there were about three emergency vehicles that necessitated pulling off to the side of the road and yield to them.  Each time I courteously moved aside for an ambulance or fire truck, I would have to wait a little bit longer than necessary to get back on track, because each time, there were at least four vehicles, driven by you-know-whats, that were essentially tailgating emergency vehicles, thus preventing me from getting back onto the road without waiting for their aggressive, me-first driving behavior to pass first.

So, now that I’m all agitated and shit again, I have to ask:

Why do black people always have to walk in the middle of the street?

END_OF_DOCUMENT_TOKEN_TO_BE_REPLACED

I got a call from the agency this morning.  An opportunity arose, and they thought of me immediately, because of where it was, and the impeccable timing that I would be available again right as they were looking.  The moment I heard the words “convenient location,” and “Are you familiar with . . . ” I literally cringed, because I feared the name of the company that they were about to say.

Y’see, I applied at this company, and it’s currently #1 on my list of places I’d want to work, primarily for the location, but also because the job listing, and my job duties at this place would fit me like OJ Simpson’s glove (perfectly, damn it).  One of the good things applying for this company was the fact that I had never freelanced there before, so a finder’s fee would not be come into play if I were to make it through.  But anyway.

“Are you familiar with [name of my #1 choice company]?“

Long story short, I told them that I was indeed familiar with company X, and that I would love to get my foot in the door with them and do some work for them, but if doing a freelance gig is going to jeopardize my chances at getting the full-time position with them, I would regrettably, have to decline on this freelance opportunity.

I didn’t really think my very first opportunity was going to result in this, but looking back, I can’t really say I’m surprised.  In a perfect world, the agency peeps will find a way to convince company X to agree to a contract-to-perm situation, bring me in as a freelancer to give me a test drive, find out they fucking love my awesomeness, and transition me into full time with little concern to the correlating finders fees.

But the world ain’t perfect, so this is probably not going to happen.  So it’s hoping for the best on my own accord, with clenched anoos and fingers crossed.