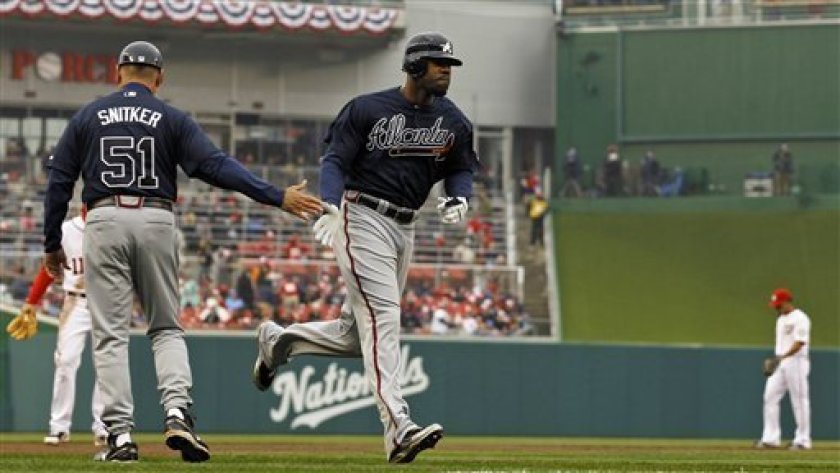 As my work day winds down, I find that my heart is still excited, and it’s influencing my physical actions.  Double-clicks are too fast, and my hands are jittery.  I’m having slightly more difficulty at being steadier with the mouse as I repeat repetitive tasks again and again with no good rhythm.  I can’t help it.  I’m excited.  The baseball season if officially underway, and the Braves have already started their season on a good note with the first win in all of baseball today.  Black Jesus homered, in his first at-bat, again.  There is much reason for me to be excited.

To spare everyone from my sports ramblings, I’ll likely be doing a vast majority of my sports-related writing on my other brog, BSW. The point is that I don’t really mind that readers of my personal brog knowing about my sports brog, but I’m not too keen on it being the other way around, just yet.

But with the kick-off of the baseball season comes the kick-off of what could very well be the most eventful baseball season of all time.  And I say baseball season as the frame of time, because it is perfectly encapsulated within the approximate time frame in which the season takes place, between April all the way into October.  Between baseball itself, possible trips, confirmed trips, birthdays and weddings, it’s going to be an extremely eventful season this year. 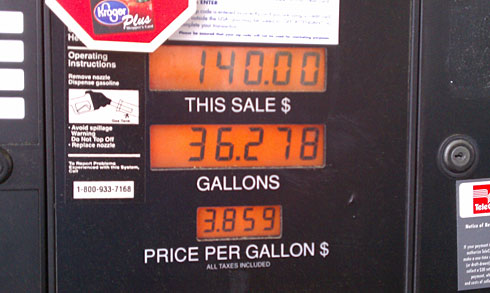 I almost couldn’t believe it when I saw this, before I filled up my tank (for the first time since Wednesday). $140.00 to fill up someone’s car? Jesus Christ. And the thing is, I think that the vehicle being filled still wasn’t at full capacity, because of the unlikely event that the car was able to hit approximately $140.00 even on the pump. But no matter, $140.00 is ridiculous. I balked at the notion that filling my new car still encroached into the $40.00 territory, solely based on the asinine price of gas in the first place, but to stamp a Benjamin on top of that, I might as well just kill myself if that were my fate, because there’s no way I’d be able to sustain such fuel costs with how much I’m required to drive in the first place.

To put it in perspective, I’m going to assume that the vehicle is obviously in the class of a Ford Excursion, or super-crew Chevy Silverado, or something along those lines, based on the 35+ gallon fuel capacity. On a good day, these guys are averaging anywhere from 15-17 mpgs, so they’re getting anywhere from 540-600 miles on a tank of gas. Based on where I was filling up from, and the notion that most people work out in the city of Atlanta, or at least from where I was, not there, so I’m going to guess that if these people were like me, they’re putting anywhere around 300-400 miles on their vehicle during a five-day work week. Factor in recreational/weekend driving, and we’re looking at possibly the necessity to fill up once a week. At $140.00 a fill up.

In 1993, my parents bought me a Sega Genesis at a Price Club, for roughly $140.00. Think about that for a second – basically, whatever guzzler this person is driving could have literally bought an entire video game console, with a second controller and Ecco the Dolphin, every single week, for what they’re paying for in gasoline. Fuckin’ crazy.

The guy I suspect is gay, who sits in the cube behind where I’m currently sitting, bought a car, literally two days before I purchased mine.  Despite the fact that while talking cars two weeks prior to our respective purchases, and me mentioning just how much I regretted purchasing a used car, and that crooked people will pay crooked mechanics crooked money in order to have things not appear on CarFaxes, he still went out and purchased a used car.  A Volkswagen Cabrio, no less, which further justifies my suspicions about his sexual orientation, despite the fact that he has a wife and two kids.

But anyway, I thought I got a lot of flak for buying a car that was seven years old, but he went out and purchased a car that was discontinued outright in 2002.  Granted, his rationale was simply the fact that he did not want to have a car payment at all, which I can understand, but after the misery I just recently left behind, I’m fairly confident that there’s a very good chance that even my next-next car will be new, even if it means I’m locked into a car loan for several years, at least I’ll have the piece of mind that for all intents and purposes, I shouldn’t have to worry about my car, for at least a year or so.

Today, he’s already griping about how his window is stuck down, which is kind of amazing, considering his model is power-nothing, so there’s no regulators or window engines to have malfunctioned, simply his window crank is locked in place, and he can’t fix it.  Furthermore, the lock cylinder in one of his doors is already broken, meaning he’s having to enter his car through the passenger seat.  Man shit, even in the lemon, did I not have these kind of problems.  Regardless, it’s this kind of backlash, that despite the fact that I’ll be dumping a lot of money into a car payment for a lot of months, I still take solace in the fact that when we both leave work today, I’ll be sitting on my cozy leather-heated seats, with the functioning windows, while he’ll be chilly and miserable driving home to his week-old broken, already junker.

It’s still kind of in its infancy, but man, can I sense the sheer amount of potential coming out of it.  For anyone I know who might enjoy baseball, sports, and other jocky stuff, Blown Save, Win (BS,W) is like, the tits.

I’m reading a book right now, and several people in my little world are either saying things, making references, or are currently experiencing events that are precariously coincidental to the elements of this very book. Fascinating.

Obviously, in the process of buying a car, nobody goes to a car dealership, finds the car they want, and immediately agrees to pay approximately what’s written on the sticker of the vehicle.  Fuck that.  And in the case of my recent car purchase, I most certainly did not pay the listed price that was posted on the vehicle I ultimately ended up with.  I paid significantly less was posted; perhaps I could have done better if I had a little bit of time on my side, but I didn’t, but I’m fairly satisfied with the whole process in the short amount of time in which I accomplished it.  But suffice to say, it wouldn’t have happened if I didn’t speak with many different parties.

After sniffing around for the car I wanted, I discovered that it was available at Big Boss Man’s dealership.  Right then, I decided that the Big Boss Man was ultimately going to be my primary target of where I wanted to purchase, since they had the exact car, with all the features I wanted, right there, ripe for the taking.  However, I didn’t want to pay close to the sticker price on it, so in order to play ball, I knew I had to get some other parties into the fracas.  So, I inquired with Buff Bagwell, Muhammad Hassan, Stevie Ray, K-Kwik, and Konnan’s dealerships, to see what estimates they would be willing to give me for the same car, regardless of the fact that I knew not one of them had what I was looking for in their current inventories, but it wouldn’t be impossible for any of them to acquire what I was looking for in order to gain my business.  And to make things interesting, I decided to reach out to the distanced Ric Flair’s dealership, in order to have an unknown ace in my pocket for negotiation purposes.

END_OF_DOCUMENT_TOKEN_TO_BE_REPLACED

Just watched a yuppie mom empty out her kid’s plastic cup, replace the contents with her remaining margarita, and then walk out the door. God, yuppies sure are something.