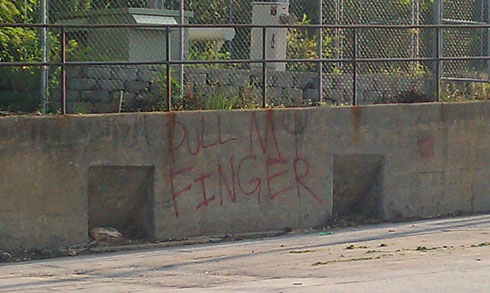 There’s something to be said about the culture of tagging in the world, but sometimes it’s funny to just see something kind of out of left field to get the mind wondering.  Here in Atlanta, the popular tags are a head in a ski-mask, Pac-Man ghosts smiling broadly, the word “DOSE,” and a bunch of indecipherable marks that pockmark bridges, billboards, walls, and other public or private property that are illegally being desecrated.  That being said, I can give some genuine appreciation to PULL MY FINGER, because there’s really no explanation needed.  Most everyone knows what the joke is, and it’s kind of refreshing to see something that requires no explanation being used as vandalism over the esoteric, kind of bullshit tags that are scattered around the rest of the city.  I mean, I like the Pac-Man ghosts as much as the next nerd does, but I have no fucking idea what the point of it is.

At least with pull my finger, there’s a modicum of sense being made, since it relates to fecal matter, and so many here in this fair city are full of shit, so there’s a connection there.