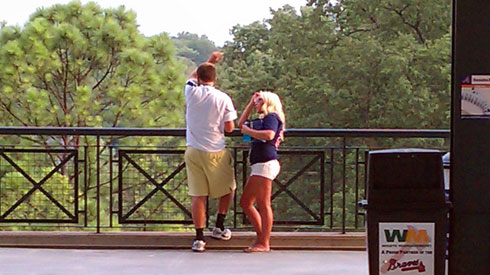 I thought about putting this up on my sports brog, but then I thought fuck it, this isn’t really something for BS,W.  When I first saw these two storm out of the section, I said “hehe, they’re going to go break up,” not really thinking much of it.  But then minutes later, I turned around and noticed the two of them hanging out on the railing, appearing to be having some intense conversation, based on the tepid body language.  “Holy shit, I think they are breaking up!”

Instead of watching Brave after Brave helplessly flail against Tim Lincecum, I found myself voyeuristically watching this young couple appearing to be headed down Splitsville.  My usher friend and I sadistically watched with enjoyment as with each pleading arm wave from him, and the dismissive hand through the hair from her, the negotiation appeared to be going nowhere but downhill.

And then came this moment of truth, that I managed to capture on camera, completely coincidentally – the wiping of the tears.