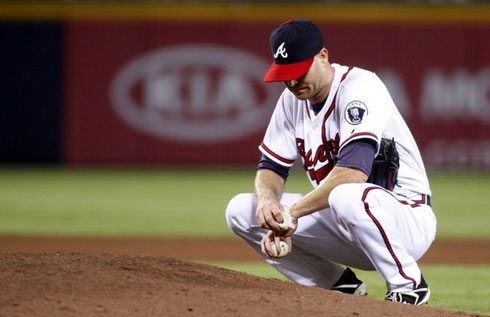 In all honesty, what happened on Wednesday night doesn’t bother me that much.  Certainly not to the point, where pretty much everyone who knows that I love baseball, seemingly needs to give me condolences as if the dog taco died on me or something.  I love baseball and all, but it’s still, just the game of baseball in the end.  Out of a field of 30, the expectations for championships is slim every year, regardless of the accumulated talent and what so-called experts predict.

END_OF_DOCUMENT_TOKEN_TO_BE_REPLACED 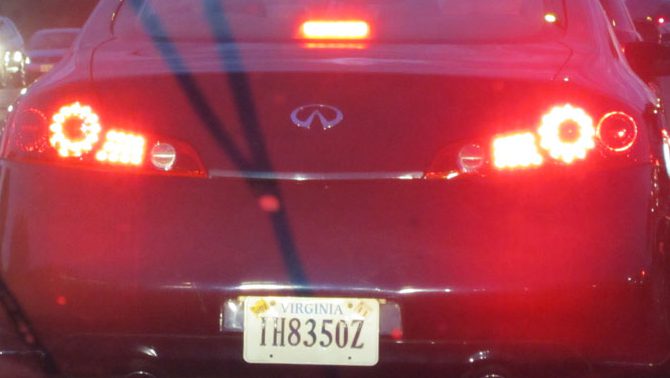 Quite the interesting vanity plate on an Infiniti G35 coupe.  Y’see, the Infiniti G35 coupe and the Nissan 350Z are essentially, the exact same car.  Strip the body panels, and all the superficial seating, and accessories, down to the naked body, skeleton, and heart, and you’ve got an identical chassis and motor.

I admit there is a little bit of cherry picking involved in these statistics, but come on, chassis, engine, power – these are some pretty key components to an automobile. The point remains that aside from the body panels and car’s design, which are kind of similar in shape, the two cars are the same thing.

Why the driver of this G35 hates 350Zs is completely beyond me. 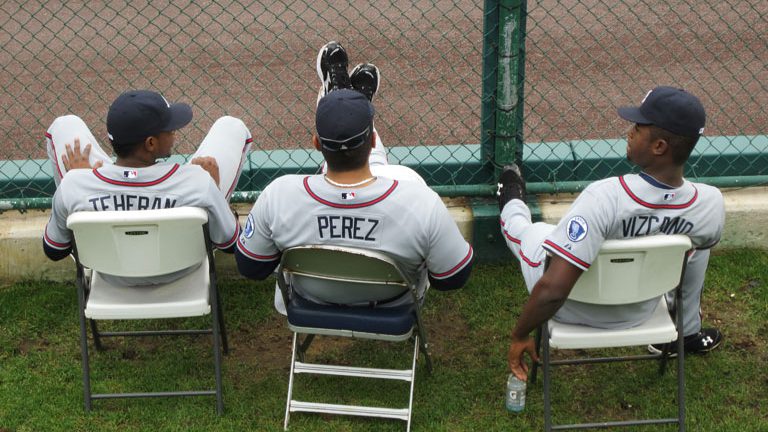 With the season winding down, I decided to go up to Virginia and catch some bonus Braves baseball while spending time with my friends.  Even though I knew that the Braves always play like shit up in Nationals Park, I would rather set superstition aside for good company and live baseball.  Despite the fact that the Braves managed to pull out the victory in the Friday game, they came back down to earth on Saturday and Sunday, by promptly getting pwned, as is customary in D.C., bringing my record to seeing the Braves at Nationals Park to an awesome 1-5.

END_OF_DOCUMENT_TOKEN_TO_BE_REPLACED

Baseball is making me sad right now, and I don’t have anyone to really discuss it, nor does anyone really want to listen.  Not because the Atlanta Braves are on the verge of a pretty monumental collapse, having allowed a supposed insurmountable lead for the final playoff spot disintegrate completely, boiling down to a showdown tomorrow, or rather later on tonight, on the regular season’s final day.  That disappoints me, but I understand that defeat happens, and losing is a part of sport.  Whether it’s a historic collapse, or a triumphant comeback, there’s winners and losers.

What makes me sad right now is all the negativity surrounding the circumstances.

I know it’s pretty ironic for me to point out negativity, considering that in many other aspects outside of sport, I’m a pretty pessimistic individual.  But in seriousness, I feel as if all Braves fans and supporters around me have adopted this defeatist mentality, and have long given up on the team they supposedly root for.  I know that it’s frustrating, so I can’t blame at all these people for being all jaded and pessimistic, but up until the events of the previous night, the Braves were still in the driver’s seat.

END_OF_DOCUMENT_TOKEN_TO_BE_REPLACED 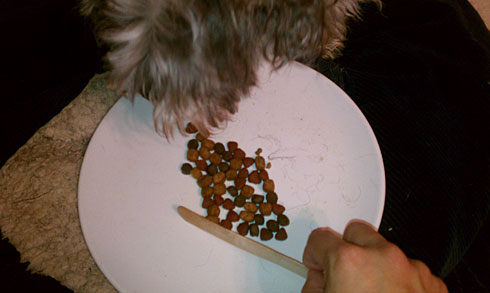 The dog taco is elderly, and needs a little bit of assistance with some tasks these days.  He’s also become quite the finicky eater, and his weight has fluctuated in a not-so good way as a result.

Recently, I’ve discovered the way to expedite his eating habits, but such a process requires me to sit and monitor him while he eats, to make sure that one, he eats, and two, assisting the mostly blind dog taco realize that there is food in front of his face.

I feel like a craps stickman, sitting next to him while his face is in his eating dish, while I have to continuously push the scattered kibble morsels back to the center of the plate for him to dive in and have plenty of food ready for his consumption for him to vigorously chow down on.  With each series of bites, the kibble scatters along the dish, and like at a craps table, I have to use my little stick and gather and compile them back to the center for  him to continue eating.

But it’s all worth it, because lately, it feels as if he may have put some weight back on, since being on this twice-a-day mini-meal schedule, even if it means playing dog food croupier, and ain’t nothing too much to ask for the dog taco.

Driving around the A-T-L, every now and then, I’ll see a car on the side of the road, obvious victims of running out of fuel.  Sometimes, there will be a person in the act of pouring fuel into the gas tank, and other times, off in the distance, I’ll see someone walking to, or walking away from the vehicle; sometimes with a red gas tank, sometimes without, and they’ll have to pick one up.

Now if I lived out in Nebraska, or even a place like Kingdom City, Missouri, where the population is sparse, and the volume of gas stations are far more sparse than in a city like Atlanta, I could understand the occasional brain-fart in poor preparation, and once in a blue moon, running out of gas.  But in a large metropolitan area like the city of Atlanta?  How is that even possible?  There are thousands of gas stations in Atlanta, so I’m pretty much baffled at how negligent people can possibly to where they end up stranded on the side of I-75 so frequently.

END_OF_DOCUMENT_TOKEN_TO_BE_REPLACED

A particular airline has lost my luggage.  Regardless of the stuff being more or less superficial belongings, I would still very much not be happy if the particular items were lost forever:

This weekend fucking kind of stunk from having to watch the Braves job to the Nationals yet two more times, and I was at first delighted to having gotten back to Atlanta on an earlier rather than later flight, but then this fucking debacle is just the god damn icing on top.