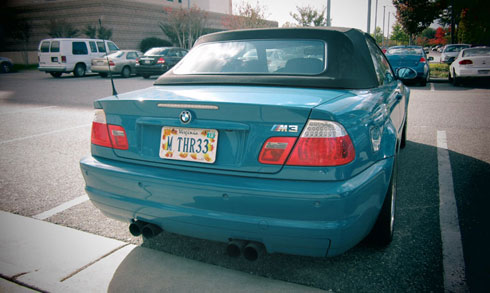 It amuses me to no end when car owners are so proud of their vehicles, that they require vanity plates to boast about their cars.  Most of the time, this occurs the most with Honda drivers; I’ve seen with my own eyes a Honda S2000 with the license plate “S2000,” and once even a Civic… A HONDA CIVIC (with no trim badge, meaning it’s a DX) with a vanity plate saying “CIVICPWR (btw, the Civic DX has like, no power).”  There are several other notable examples floating around on the internet in regards to obvious vanity plates on Hondas.

But since everyone knows that I love BMWs, this affliction is not avoidable by arrogant BMW drivers either.  Case in point – this BMW M3, with the plate saying “M THR33,” which I find to be confusing.  Yes, in leet speek, it would be phonetically be “M THREE,” but since I live in reality, I’m kind of baffled by the two 3’s to designate it.

Does the 33 designate engine size?  If that’s the case, then this is incorrect; this particular M3 came in 3.0 or 3.2 liter sizes; even today’s M3s, none of them are equipped with a 3.3 liter.

Or perhaps it’s taking cues from the fashion in which BMW designates its cars; M-series cars are typically the cream of the crop when it comes to any family of BMWs, but the fact that their plate says 33, it kind of implies that it’s a 3-series with a 3.0 liter engine, which would probably be the most correct interpretation so far.  But at the same time, they’re essentially exposing the fact that it’s a 3-series with a 3.0 engine, which can describe both the 330i or the M3.

It’s overall very contradictory, and it doesn’t really serve any purpose other than to propagate stereotypes about BMW drivers being arrogant, excessive, ignorant, and a whole bunch of other derogatory personal adjectives, or all of the above.  So as far as vanity plates goes, M THR33 gets a big fat F. 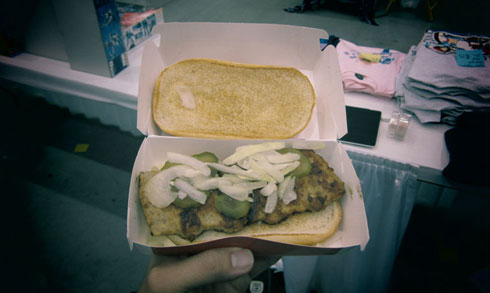 My camera that I’m still trying to cope with over the fickle settings, happens to have a Toy Camera Effect mode. In other words, a setting that pre-applies darkened corners as well as kind of dims down the colors, that toy cameras like Holgas do. Since a lot of my pictures seem to have oversaturated colors until I can figure it out better, I decided to give the Toy Camera mode a whirl, as I’m sure anyone who peruses through my Neko-con photos might notice a chunk of photos that have this setting applied.