And these guys were “experts” in the “tournament.”  In every “match,” there was one guy who had a higher score than the other guy, but let’s face it, neither are winners when they’re completely handcuffed to the railing while they have epileptic seizures with their feet, more concerned with the score and not missing any arrows instead of actually, you know, dancing.

Amazingly, despite the fact that every match looked just like the previous match, there was almost always a crowd to watch.  Either they’re really impressed with their scores, or they’re all also contestants waiting for their turn to hold onto the rail and spasm with their legs to the sound of a beat. 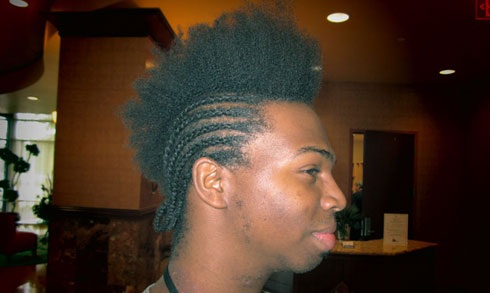 When asked what he calls this hair style, he said “fluffy mohawk.”

I prefer to call it “Afrohawk in the Cornfields,” but that sounds a little redcorn-ish.