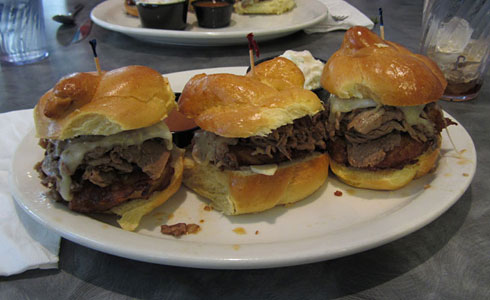 It’s not that I’m deliberately trying to be politically incorrect and tasteless, but the best way to describe what happened to these Jewish sliders is that I committed a holocaust on these motherfuckers, they were that good.  If they weren’t so tasty, I’d have saved one of them, just to take back to the privacy of my bed chambers and literally, place my dick between the bun.

I am completely serious when I say that I was almost in tears when I consumed the first one.  Maybe it had to do with the fact that it had been 11 hours since my last food prior to eating these, but I swear to god I might kill a homeless person to get my hands on three more of these delectable Jewish sliders.