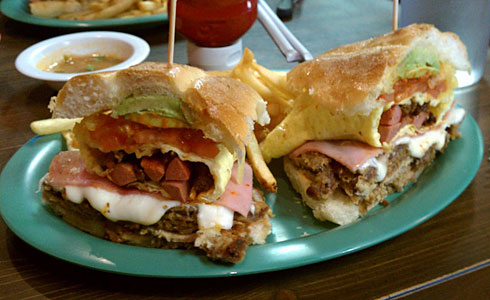 Getting to Torta de la Reyes involves driving down a sketchy stretch of a redcorn road called Indian School Road, where you have to pass like 20 redcorn businesses, several sketchy strip joints, chop shops, and imigracion offices, but this sandwich made it worth it.  The entire place was entirely Mexican, but nobody seemed to notice white boy and chino wandering in to sample some of their foods.  Our waitress even addressed us in Spanish, before I had to bust out “no habla Espanol” before she switched to English.

The ironic thing is that this restaurant’s other location had the sandwich that was twice the price, and probably twice the size of this monstrosity that I initially scoffed at not being able to get.  The best analogy for this beast of a sandwich and how it dominated both Huzzard and myself is that we both thought we could take Shredder, but instead this Krang of a sandwich kept beating our ass, and we never even got to lay eyes on Shredder when the day was over.

It was a truly delicious sandwich, but I couldn’t finish it.  Granted, we had only eaten three hours prior, but even on a hungry, empty stomach, I don’t know if I would have been able to tackle this entirely.  Not to mention the absurd side of fries.