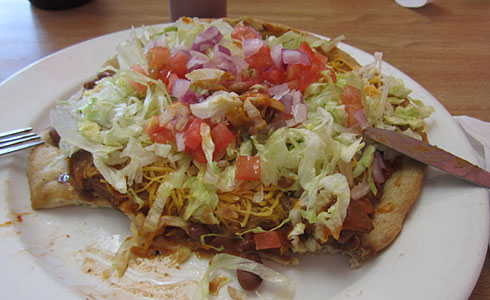 I’m not going to lie – the main reason why I went to this place in the first place was because it was called “Sacred Hogan.”  I know in redcorn-speak a hogan is something of a wooden cabin structure where ceremonies are held if it’s a “male hogan,” and food is made if it’s a “female hogan,” but let’s be real here.  Hogan is synonymous for one thing, and really just one thing.  Which is obviously the god damn Immortal Hulk Hogan.  And Sacred Hogan sounds just fitting as a shrine to the Sacred Hulkster himself.

But really, I’ve never really had redcorn food in my entire life, so this was as good as time as any to try some.  From the Hulkster’s sacred shrine.  In all honesty, this Navajo Taco wasn’t the greatest thing in the world, but it was far from the worst.  To give benefit of the doubt, I’m guessing my tastebuds are all sorts of fucked up and ruined by all the processed and unhealthy crap food I eat on a regular basis, so something so fresh, natural and redcorny like this Navajo taco go a little under appreciated and is construed as a little bland.  Adding some salsa helped a little bit, but overall, the flavor was a little light.  But not to say it was bad at all, because I ate it all, and I really wouldn’t do that for something I didn’t enjoy.

So in all, Hulkamania would approve of the Sacred Hogan.  Brother.