I’m pretty sure I can count on one hand just how many people are in this office today.  Granted, I’m not complaining at the fact that I’m getting paid to sit here and do absolutely no work, but man, I certainly wouldn’t have minded sleeping in this morning.  But instead, I trudged out of bed at 6:30 a.m. to go run around the ‘hood in 36 degree weather, and here I sit, waiting for a few hours to pass, since I made it all the way out here already.  So with that in mind, and since I’ve pretty much seen the entire work-safe internet now, I suppose it’s not a bad time to sit back and catch up on some writing.  And with the end of the year literally right around the corner, why not use that as a topic?

Since I’m at the office, and don’t ever visit my own sites on the network for paranoid fear that they’ll one day find my online identity, I’m musing most of this based on what I can remember off the top of my head.  But the good news is that, as a whole, I don’t think that the encapsulated 2011 year was a very bad year at all.  Compared to 2010, it was a much improved year.  At first blush I want to say that it wasn’t anything magnificently spectacular, but the more I think about it, I guess I can say that 2011 was a pretty decent year overall.

END_OF_DOCUMENT_TOKEN_TO_BE_REPLACED 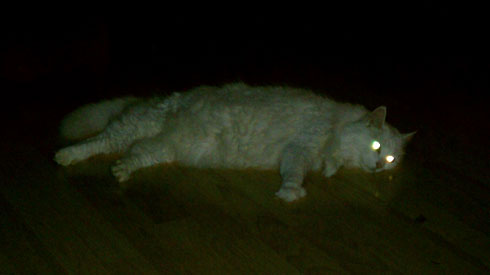 Ever since I learned of the existence of this particular meme, it’s been one of the most amusing to me.  That being said, one of Jen’s cats, under Harbinger’s DIRECT CONTROL. 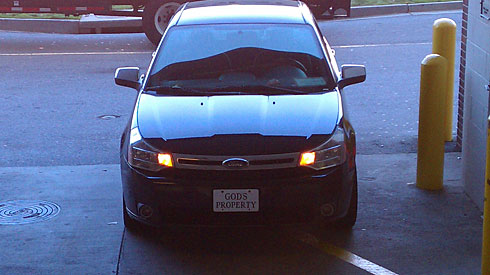 But it’s still illegally parked and in the fucking way.

Saw this shit recently while I was trying to do some work.  In the midst of the slow holiday period, I volunteered to do some grunt work, to look like a good team player.  The company was going to haul some furniture in from their warehouses, delivered in one of their company trucks.  It was cold and windy outside, even in the storage bay.  But for whatever reason, God’s Property here saw it fit to illegally park, block the company truck, and deliver some shitty catering to one of the other companies in the building, while myself and several other grunt workers were forced to wait for them to emerge.

Needless to say, the time spent waiting, even the most religious of saints was cursing God’s Property for wasting all our time. 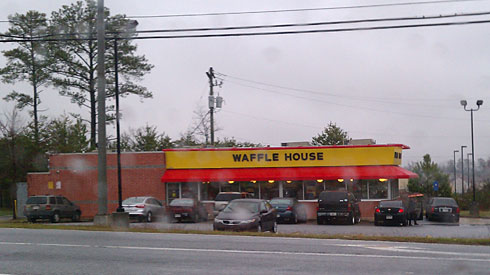 Jews have Chinese food on Christmas.  I have Waffle House.

As depressing and desolate as the imagery of Waffle House on a dreary, rainy Christmas afternoon is, believe it or not, it’s one of the things I most looked forward to doing on this day.  Two years in a row now.

I got a Keurig coffee maker today.  I’m on my second cup of coffee now.  Weekends and non-working days will never be the same again, but for the better.  No more no-coffee headaches, as long as I have K-cups.

Merry Christmas, everyone out there. 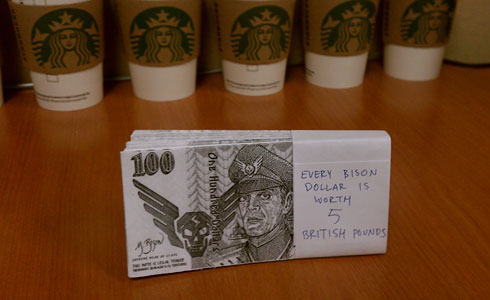 What a great movie.  Raul Julia declaring moon money with his likeness on it as significantly stronger than the British pound, and then fighting with Jean-Claude Van Damme.  And in the end where Sagat steals all these chests of money only to find out that they’re Bison dollars – classic stuff there.

Today, I slept in until 11 a.m. and it felt magnificent.  I guess this is where I should wish people Happy Kwanzaas and all that holiday shit, so there you have it.  Happy Boxing Day, and whatever else is recognized this time of year, seeing as how I have no idea if the compulsion to write will come back with all the off and down time I’m about to have throughout the next week or so.

Atlanta parents face a $1,000 fine and up to 60 days in jail when their students skip school under a 2009 ordinance city officials say they now plan to enforce.

Long story short: Parents, be responsible, and be aware of where your kids are, and if they’re skipping school, YOU’RE the one who’s going to be at fault.  So do what you got to do to make sure yo’ kids don’t WANT to skip school.  If you know what I’m sayin’.

Parents are the de facto lords of their children, and have the obligation to pass on acceptable behavior and raise their children to be capable citizens of the world.  Far too long has the degradation of society been stemmed back to shit parenting, by parents who are degenerates in their own right, or are people who are simply just shitty parents and have no idea how to be a parent, let alone a role model, or example setter.  Kids today that are pieces of shit typically have parents who are pieces of shit, it really is that simple.  Good parents don’t let their children become pieces of shit, without an earnest effort.