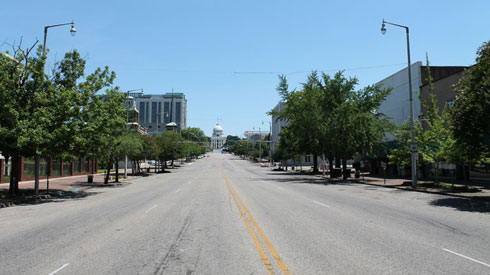 If you were to tell me that I Am Legend took place in Montgomery, Alabama, I would be inclined to believe you. This is a picture of downtown Montgomery, on a beautiful Sunday afternoon, and there isn’t a single soul in sight. I am literally standing in the middle of the street, with no fear at all of any oncoming cars. Because there simply are none. I really imagined that this is what Robert Neville felt like when wandering about in Los Angeles in the story, notating any dark and shady crevices in which vampires could be hiding in.

Apparently in the god-fearing south, and then deeper in, in Montgomery, they fear him just a little bit more, to the point where they go into complete hiding altogether on Sundays outright.

END_OF_DOCUMENT_TOKEN_TO_BE_REPLACED

Everytime I see this commercial, I can’t help but think this.

I vaguely know the name Abby Wambach, because I look at enough sports websites on a regular basis for osmosis to eventually absorb, or maybe it was during the time when the whole world was fascinated with Hope Solo that some of her teammates names manage to float around or something, but I had no idea of what she actually looked like.  So I really had no idea that the “protagonist” of this Gatorade commercial was Abby Wambach until the descriptors in the YouTube video revealed such information.

But watching this commercial, I’m always thinking that Abby Wambach looks like the main character from Wanted.  That crappy movie which also had Angelina Jolie and Morgan Freeman, where the concept of curving and hooking bullets came from, which I’ll occasionally rage-complain/reference while playing L4D, when I’m picked off around a corner, miraculously.  But I mean, come on – look at the picture; they totally look alike.  The swimmingly-green eyes, the Penguin-like hook nose, and even the furrowing of the brow, in intense agitation.

So now that the comparison is complete, it’s deduced that the guy from Wanted apparently plays professional women’s soccer when not making shitty movies.  Ironically what he does off-screen is reminiscent of the Rodney Dangerfield flick, Ladybugs, which focused around a dude playing soccer on a girls’ team.  And much like the character he played in Wanted was a gigantic pussy, the guy from Wanted waits until his defender is fatigued and feebly weak before exploiting it for the win.  Granted, I’m not above accepting wins no matter how they come, but ideally, nothing is more gratifying than beating an opponent when they’re at their best, not when they’re on their last legs.

But whatever – Wanted was a shitty movie anyway, and I stopped drinking Gatorade for the most part.  Too much fucking sodium. 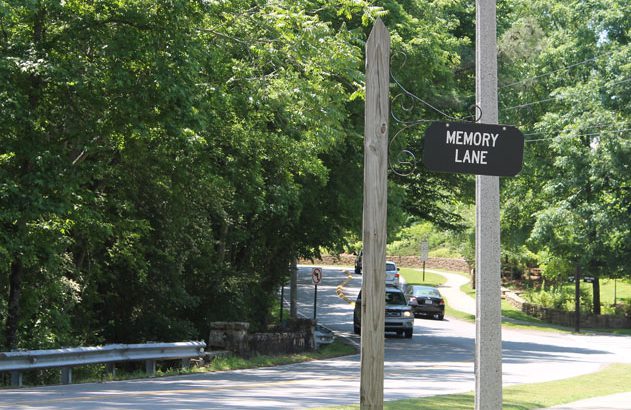 And according to Google Maps, it’s only two tenths of a mile long.

Must be some really sad lives out in Birmingham, to have such a short memory lane down there. 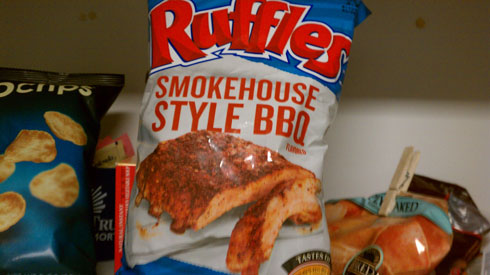 As amazing as the thought of rib chips would be, it’s hard to fathom how such would be executed.  But when Jen and I were at the store the other day, I stopped dead in my tracks when I saw this bag of Ruffles Smokehouse Style BBQ chips.

Pictured on the bag is but a half-rack of the most succulent, meaty, heavily seasoned looking ribs the world has ever seen.  Ruffles has clearly transcended the need to even bother putting potatoes or the actual product on their bags themselves, and instead just gone straight for the jugular by putting a picture of what the chips are supposed to taste like.  The name is kind of there as a formality more or less, but nowhere on the front of the bag is even written the words “potato” or “chips.”

Instead, it’s just the greatest looking ribs in the world screaming “FUCKING BUY ME AND EAT ME YOU GOD DAMN PUSSY.”

The fact that it’s in my snack cupboard says who won that conflict. 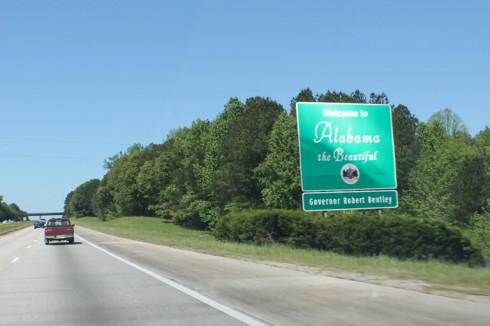 Since I was kind of sick at the start of the baseball season, I pretty much missed the entire opening homestand for the Braves.  Which is kind unfortunate, considering the Braves won five out of the six games they played in Atlanta, but now they’re on the west coast, and will be out there for like another week, or so it will feel.  Or maybe it’s just that I really relish the novelty in visiting ballparks I haven’t been to before, over my home park, who knows really.  So the first baseball game I went to live this year would be a new one.

Despite having lived in Atlanta for the past nine years, I’d never actually stepped foot in the state of Alabama before.  I’ve never had any reason to, and I can’t say that I’d never felt compelled to visit for any other reason than baseball.  Living where I live, I’ve had my share of exposure from Alabamans, most of them less than positive.  Too much Roll Tard and absurd loyalty to college football spawning irrational idiocy.  But with Rome and Lawrenceville already off the list, it left me with few alternatives.  And with the Braves’ double-A affiliates from Mississippi playing in Birmingham, it looked like good of reason as any to make my first ever trip into Alabama.

END_OF_DOCUMENT_TOKEN_TO_BE_REPLACED 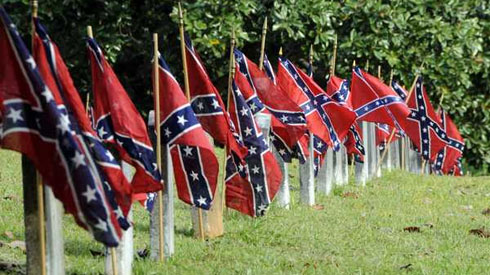 Except that it’s okay to forget.  Unless you believe that adage of those who forget are condemned to repeat.

Ain’t nothing like extending a birthday weekend than getting a day off due to Confederate Memorial Day. It’s funny, because it’s such an acknowledgment of once such racist beliefs.  Everyone at the office talks about how embarrassing it is that the state still acknowledges it, but I don’t hear anyone complaining about a day off in that dearth period between Moloch Day and Memorial Day that all the other pleebs in the state, and other liberal-minded states don’t get off.

But whatever.  I have today off, and you probably don’t.  Ironically, I’ll still find myself sitting at a computer for a lot of today, before I force myself to get out of the house and go to the store or something, before settling into ME3 time.