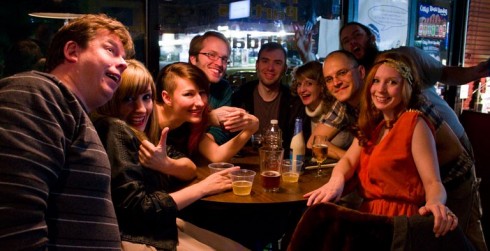 When I was younger, there was always a part of me that felt some anxiety at the notion that New Years Eve parties had to be awesome, that they were supposed to be these big, grandiose shindigs, confetti, streamers, and all that made-for-television nonsense.  Eventually I realized that the best times I had on New Years Eves were always the ones that where the company was modest, but close and quality, and we frankly just enjoyed the time counting down the hours and minutes before midnight.

In spite of the slight hangover, being the studious and dedicated brogger that I am, I’m still prompt when it comes to actually posting pictures I take.

This  year, my friends and I spent our New Years Eve at Battle & Brew, our favorite nerd gaming bar.  We played games, enjoyed conversation, and some of us, like me, drank quite generously.  And I brought out the good camera to attempt to document some of the good times.  Sadly for myself, I felt like I was dressed pretty snazzy on this particular night, but as is often the case being the guy with the camera, there’s no documentation of such.  Que, sera, sera.