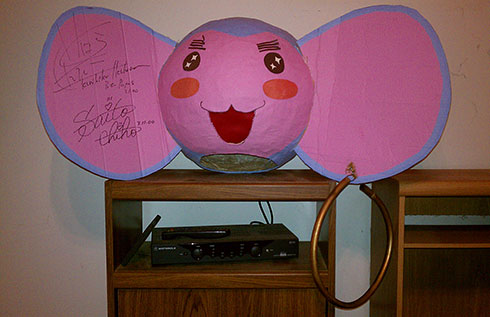 Over the weekend, I unearthed this old Chu-Chu costume that I wore twice in 2000, thirteen years ago. God damn, that’s a long time ago, and I’m once again reminded of just how old I am now. Given it’s age, it’s still in pretty good condition, and could very easily still be worn today.

The scribbles on the ear of Chu-Chu are from the creator and the manga artist of Utena, Kunihiko Ikuhara and Chiho Saito, respectively. I do have a fond memory of the bemused looks of surprise and amusement on their faces when I plopped a gigantic papier mache head onto the table, and the recognition set in to what was actually right in front of them. Hey, at least it adhered to the strict policies that no bootleg merchandise was to be requested to be signed.

At one point, I loaned it out to someone else to wear at a convention, and my mom even wore it to work once for Halloween and won an at-work costume contest, which is the most success it has ever received.

Otherwise, when I think back to a lot of the memories associated with this costume, there really weren’t that many great memories to be had, to be perfectly honest.