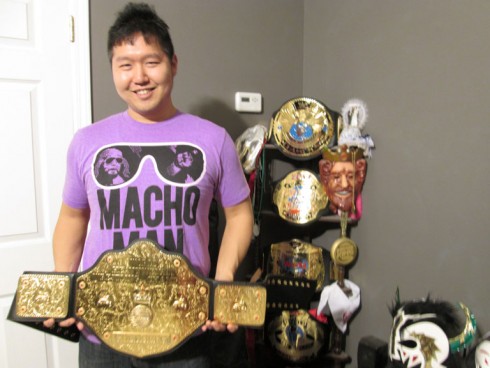 Considering I had the World Championship belts for the WWF and ECW from the late 90s into mid 2000s era, it was inevitable that I would need to get the WCW World Championship belt eventually.  An opportunity arose when I saw one for sale on Ebay with an egregiously high Buy It Now price and an unknown reserve attached to it.  I knew what I had wanted to spend and I honestly didn’t think it had a chance to break the reserve considering that the Buy It Now price was almost twice what I had in mind, but it turns out that my Hail Mary bid ended up nicking the reserve by three cents, making me the winner to a Big Gold Belt.

And the thing is this is actually a WCW belt and not one of the replicas from WWE after they had acquired all of the WCW assets.  Nowhere on the belt is a WWE logo or emblem anywhere, and even still had a Bill Goldberg nameplate attached to it.