In an attempt to try and be a somewhat contributing member of the internet when it comes to sharing knowledge, I’m going to make a conscious effort to chronicle the construction of this LeBlanc staff I’m making with some actual descriptions, instead of simply taking pictures and posting up a blurb like I had done with the Mafia Graves gun throughout the time before Dragon*Con last year.

“02,” you say?  Where’s “01?”  Although this is the first post I’ll have made about the staff, the first progress photo would have been this here.  This was the staff’s initial pieces cut out, and nothing more.  The above picture is the second progress picture, also with a reference shot so that anyone viewing might have an idea of what the heck I’m making.

As for the process, I’ll spare the gory details for after a jump.

END_OF_DOCUMENT_TOKEN_TO_BE_REPLACED 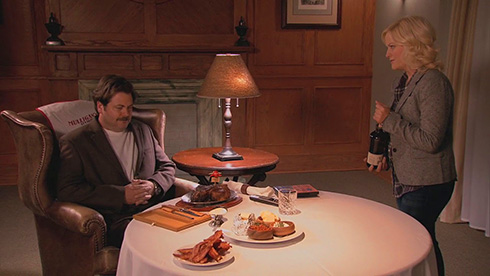 Although there are a lot of moments in Parks & Recreation that justify my general love for the show, it always comes back to this particular moment.  At the very end of Season 3, Episode 12 there is a moment where Leslie presents to Ron a private dinner, consisting of his favorite steak, a dish full of bacon, a bottle of whiskey, and a television playing classic war movies.  This spoils absolutely nothing, because one, at this point, I’d imagine most Parks & Rec fans have already seen this, and two, without the circumstances and context behind it, this scenario is relatively meaningless.

But it’s a touching moment between two core characters that displays the genuine platonic love, respect and admiration that exists between them, that kind of comes out of nowhere, considering the frantic and comedy-driven nature of the show as a whole.  It’s nothing too heavy, there’s nothing written between the lines, and yet there’s a lot of emotion in this brief exchange between the characters.  One of those “faith in humanity restored” kind of feelings afterward for a guy like me.

END_OF_DOCUMENT_TOKEN_TO_BE_REPLACED 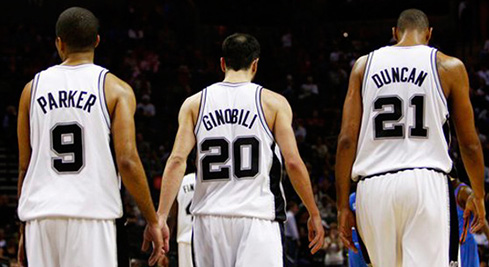 Not that I pay a tremendous amount of attention to the NBA, but it’s almost impossible to ignore when some awful four-lettered “sports channel” is on just about everywhere from the gym to various restaurants.  That being said, I was astutely aware that as of right now, half of the NBA Finals is set, with the San Antonio Spurs securing their spot in the finals.  Meanwhile the Heat and Pacers are duking it out in the east, to see who will oppose them for the championship.

END_OF_DOCUMENT_TOKEN_TO_BE_REPLACED

I know that I’m really critical when it comes to the topic of eSports and “professional” online gaming, but when I read on some LoL site about how the Koreans at a recent LoL tournament went all Hulkamania and annihilated all of the competition, I still felt that cultural pride, that even in something as silly as pro-gaming. Perhaps the old hat jokes about Koreans being the best at Starcraft and Counterstrike can take the backseat to something that I’m actually interested in like League.

Anyway, I came across more information about the tournament about how in the finals of this tournament, the Koreans not just beat the Chinese team, but absolutely owned them. 2-0 in a best of three, and it apparently wasn’t even close. Since I’m familiar enough with the game mechanics to understand what I’d be watching, I took some time to watch the deciding game just to see for myself just how badly Korea whooped up on the Chinese, because I’m sadistic and petty like that.

END_OF_DOCUMENT_TOKEN_TO_BE_REPLACED

I’m still in the midst of this writer’s funk, where I feel like I want to write something, but I simply don’t know what I want to write about lately.  It’s hard to explain how I’m feeling these days; I can’t say that I’m in one of my bouts of depression or being all ronery-emo, because I don’t really think I am.  Work is boring and stagnant, but it’s not like I didn’t know this was going to be the status quo when I took this job.  I’m working out and exercising along the same clip, and I feel physically fine, and mentally too, for the most part.

Yet, I can’t really find or think of anything remotely interesting to write about these days, to which that puzzles me a bit.  Usually, I lean onto local news, or try to find something remotely interesting on the internet to spark some train of thought worthy to put into words.  But Atlanta news is pretty stagnant and predictably boring, and nothing makes me want to write about racist agendas and the obvious racial bias that “my fair city” exhibits on such a regular basis.  Not to mention the fact that all the local Atlanta news outlets are money-grubbing rags that recycle the same news anyway.

The Atlanta Braves blog I occasionally write for, I’ve been informed that there are going to be some changes with.  Although it’s nothing really that serious, it does make me wonder if I want to continue to obligate myself with writing about baseball on a weekly basis.  Obviously, my fandom with baseball has grown a little disenchanted over the last three seasons, but I kind of wonder if this was an opportunity to dive head-first into trying to re-invigorate it, or if I just want to stop outright.  Sometimes I think that my position of floating in the middle isn’t necessarily the best idea.

Speaking of baseball, it’s not that I don’t love the game any less than I used to, but here’s an interesting fact: I’ve been to one Braves game all season.  I’ve been to more baseball games at Coors Field in Denver, than I have at home in Atlanta.  I’ve seen as many games in Detroit and Miami as I have at home in Atlanta.  It’s not that I don’t enjoy going to the ballpark, it’s just that the idea of going alone isn’t what it used to be.  I tell you, one of these days I’m just going to have to buckle down and get on board with an 81-game plan, and make my damndest effort to do an entire 81-game season.

Maybe this is the kind of slump that happens when I don’t really do anything in my spare time.  I’ve been spending a lot of time reading lately, and I have to admit that since I started using my iPad as a Kindle, I’ve been reading a ton of books, and I’m finding it more of a bear than anything else when I force myself to read a physical book again, but my declaring particular authors as “physical book only,” it’s something that I’m not going to abandon any time soon.

But my list of options of things to do when I’m at home is a little stale, and makes me think that it’s contributing to my overall mental stagnancy lately.  All I do when I’m at home as of late is either read, play LoL, or watch DVR’d shows.  I could be a little bit more productive and try to do some cleaning, but when 95% of the clutter in the house isn’t mine, it’s somewhat unappealing and unrewarding to even fathom, let alone do, especially when it feels like it’s just going to have to happen again in a week.

Perhaps I need more activities to do in my spare time, to stimulate my brain into wanting to write about something.  That’s usually what normally happens, when I really find inspiration to write, while I’m doing something else, creating the false conundrum that I need to address and write about something while the iron is hot, but oh noes, I suddenly don’t seem to have the time to do such.  Perhaps I should actually address these projects for Dragon*Con while there’s still plenty of time in advance, as opposed to trying to get everything done in the month of August like I ended up doing last year.

But until then, this writer’s funk blows.  I like having something a little more focused to write about.

I kinda feel lame and like I’m a teenage fanboy posting this, but I’m in a little bit of a writer’s funk lately, and I don’t like being in writer’s funks, so why the hell not?

This pretty lass goes by the name of sweet-little-world on her DA page, but more importantly is probably the best Ada Wong costumer I’ve seen.

I’m extremely picky when it comes to my assessment of what I think is good and what I think isn’t when it comes to costumes. Resident Evil 4 has been out for ages, and RE6 a little bit more recent, but the fact of the matter is that throughout all these years, I’d never actually really seen a single Ada Wong costumer that made me go “whoa” until I saw this one.

Not only does she do a bang-up job with The Red Dress from RE4, but she also does a pretty excellent execution of the RE6 Ada (although I would contest that the shirt is probably not velvet, but that’s a minor detail in the overall picture). But The Red Dress is obviously the more memorable of the two outfits, and I simply think that just about everything is right with it.

END_OF_DOCUMENT_TOKEN_TO_BE_REPLACED

Generally, when I think about myself and what I’m doing with my life, I like to think of myself as a pretty versatile person.  My interests are pretty varied, and I like to think that having versatility in my knowledge, talents and things I like to do is a good thing, and I still do think such holds to be true.

But at the same time, I don’t particularly think I’m necessarily the greatest at any one thing I do on a fairly regularly basis.  I work out every day, but I’m not massively muscular, chiseled or have unlimited stamina.  I play League of Legends on a fairly regular basis, but I’m not going really reach a level where I could become a professional or anything.  I make stuff for a living, but aside from the attempts to be humble about it, I know I’m not the greatest graphic designer on the planet.  I’m a pretty involved baseball fan, and still do a decent bit of baseball-related writing on a regular basis, but I’m not really going to get to a point where I could brog about baseball for a living, or make my own publications.

Long story short, I’m involved with several things, dabble in many, but I don’t necessarily think I’m truly great at anything in particular.  And sometimes I wonder if I want to be great at something, I need to fully commit to it, and give it my primary and majority attention and effort.