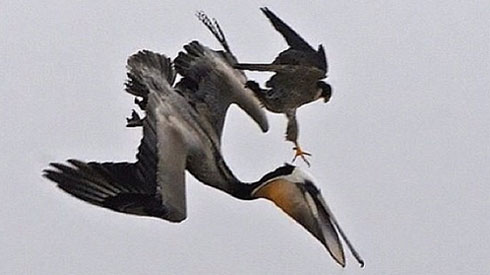 I can’t remember when exactly it was, but I’m going to have to say that it was between the grades of either 5-7, in which I had to do a report on the peregrine falcon.  Now that I’m dwelling back on it, I’m pretty sure it was when I was in the seventh grade, because my science class was first period, and I had this teacher that was kind of racist in the fact that she was over-the-top nice to the world, but always pushed her veiled black power agenda on the rest of the class (aka replacing the name “Wite OutTM to Black Out”) but that’s beside the point.  When I was in the seventh grade I did a report on the peregrine falcon.

I also remember that this was one of those scenarios in which being an artist was completely beneficial to my success, because like one of my friends back in the day, we both kind of last-second jobbed our reports.  The difference was that I presented mine way better, and with an artistic flair, and I probably managed to hide the fact that I was probably beneath the required word count, but damn did my presentation look cool in the end.  I vaguely remember getting a B or something, while he did not, and had a talkin’ to after class, about how obvious it was that he had half-assed it at the last second.