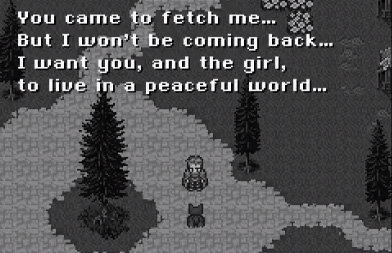 Me, being the contrarian type that typically pushes the brakes and tends to lean away from things that are popular after over-analysis and trite reasoning sometimes, kind of scoffed at the notion. It was kind of a no-brainer, since it really was going to be either 6 or 7, but for what it’s worth, I’m simply glad that 7 didn’t win. Personally, my favorite has always been 4, with my rationale being a level of challenge that seemed to be missing in every FF afterward, and the fact that it really was one the first FF I ever had, when it was released for the SNES as Final Fantasy II.

For whatever reason, I was having an emo-ey morning where I was thinking about how much of a loner I am, and then I began to hear the theme of Shadow from 6 in my head, because he’s also a loner, and well the spaghetti-western style of his theme ruled. From there, I began to think about Shadow’s character, and then the mental snowball began rolling and now I have seven Final Fantasy Wikia tabs open in my browser reminiscing about 6 outright.

But it got me thinking about a lot of little things about the story of 6, and then I began to conclude that the story itself really wasn’t that deep, but when it came to the myriad of individuals available in the game, 6 really had a wealth of quality in character development. Suddenly, I’m prioritizing mentally, if 6 really might be the best Final Fantasy of them all.