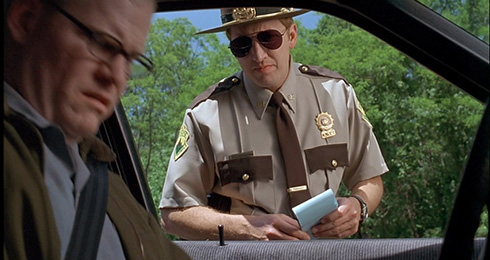 I was sitting in traffic this morning, which is nothing out of the ordinary.  Unfortunately, it was worse than it usually was due to the fact that for no apparent reason, six straight traffic signals were out, and the vast populous of Atlanta is completely oblivious to the rules of the 4-way stop in such conditions.

On more than one (fifty) occasion(s), I watched as people sped off into a turn lane, dividing lane, oncoming traffic, or some other form of asphalt not designated for regular automotive traffic, and then cut in front of some schlub too slow-reacting to prevent impatient and inconsiderate assholes from cutting in front of not just them, but every single law-abiding citizen who opt to grind it out with the rest of the pack.

It’s times like these that I wish that for one day, I could be a police officer.  Not to do anything dramatic and go off on high-excitement, high-speed car chases, bust drug dealers, stop crime and be a hero.  No, I’d love to be a police officer for a single day, just so I could troll the ever-living shit out of law breakers, and by “troll,” I mean enforce the fucking law.