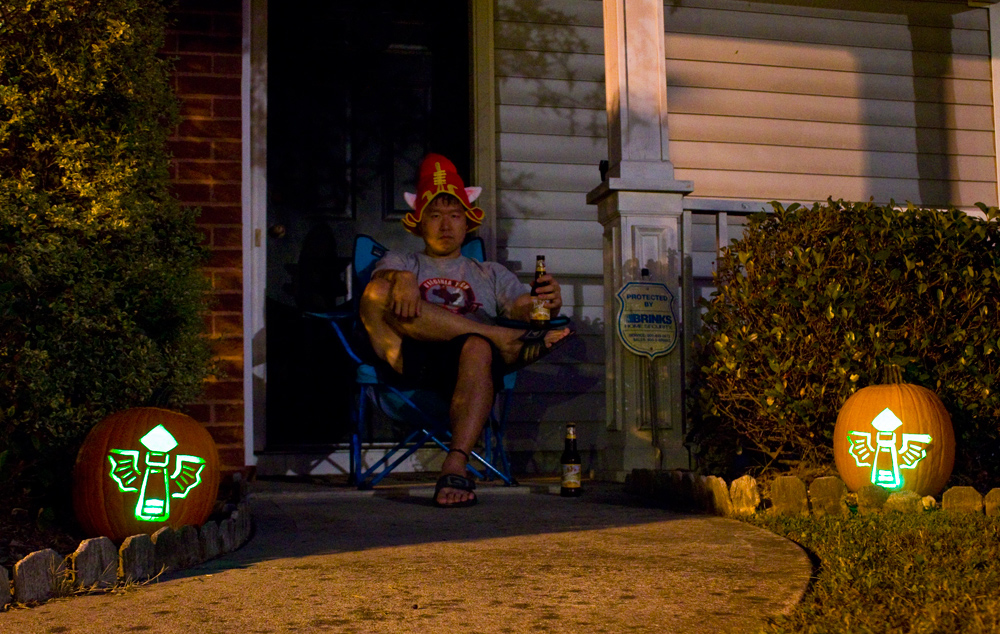 If they’re not completely rotted out, I might post them up front to give me vision on incoming trick-or-treaters.

I’m the kind of person who believes in the importance of having traditions and annual occurrences.  Without them, sometimes there aren’t always things to look forward to, and sometimes it’s just nice to know that there are going to be times when you know you’re going be in good company and have a good time.

Pumpkin carving at Stu and Allison’s is one of those traditions that I look forward to every year, and every year, I like to put a little bit of effort into carving out something unique and not necessarily easy.  This year, I decided to parlay my fandom of LoL into my pumpkin and carve out the most important things in the world – wards.  And since I’m apparently a try-hard overachiever, I decided to do two wards, so it didn’t seem like I was just doing it to say I placed one.

The green lights are LED lights and not actual flame, because I think burning copper or mercury or whatever it takes to generate green flame would have been somewhat of a hazard, for just pumpkin carving.  Maybe another year.

Anyway, I took a few pictures, and here they are for us to all admire the creativity and an enjoyable annual tradition.

END_OF_DOCUMENT_TOKEN_TO_BE_REPLACED

One thing that often baffles me is just how poorly people treat their computers.  It’s like when you sit down at someone else’s machine, and see that the desktop is completely filled with incomprehensible clutter, and the system tray icon has like 16 icons of running applications or utilities that aren’t actively being used.  And then they’re asking you what’s wrong with their machine.

Obviously, I’m not an IT guy, or someone who’s really that great with the general operations of a computer.  But I do know how to do clean installations, and understand that pre-made computers come loaded to the brim with unnecessary bloatware and egregious bullshit applications that don’t really need to be on them.  Needless to say, I’ve done quite a number of clean installations for my own machines as well as the machines of pretty much everyone in my family.  What happens to these machines once they’re out of my hands is basically, the will of god or whatever deity sounds like the best to reference.

One of the worst phone calls I could ever get is whenever either of my parents call me up whenever they’re having computer problems.  Seriously, I think I’d rather have jury duty over having to deal with the computer problems that my parents encounter, because at least while I’m waiting to get called up, I can usually get a very good amount of quality reading time in the process, and it’s something that has a definitive ending to it.  My parents’ computer problems?  The endings are vague, future uncertain, and it’s only a matter of time before something else occurs.

Today, I get word that my mom’s computer isn’t working.  “User Profile Service failed the logon” error, which probably means that something has genuinely fucked with the system registry.  In a perfect world, the remedy is as simple as F8ing at the system start up and starting up Windows with the last known working settings, but I’d bet my lunch money that the result of this whole issue is one of those weird Korean* virus/malwares that leech themselves to unsuspecting users from all the random Korean websites that my mom is enamored by.  Honestly though, trying to talk my computer illiterate mother into hitting F8 at the appropriate time during the startup itself, I’m banking on being about as difficult as painting the Sistine Chapel.

*Fuck you, Korea.  Why the fuck do your stupid fucking websites all have so much fucking malware on them in the first place?

It really sucks, and I do not look forward to having to deal with this.  I’ve told my mom countless times to be careful of what sites to go to, and to not download anything at all from emails unless it’s 100% from a genuine source, but it’s pretty much like telling a kleptomaniac to not steal anything, it’s just not going to happen.  It’s also not as if my mom’s going to completely abstain from going to Korean websites, which is pretty much all she does day and night when she’s not working these days, so dealing with issues like this is somewhat inevitable.

The bottom line is that it’s exasperating to see how people treat the computers I set up for them.  I don’t set these machines up very differently than how I set my own up machines, and I like to believe that my personal computers are pretty clean and not too heavily spammed up by malware and bullshit.  It just feels like a slight metaphorical slap in the face when the users of these machines don’t do the most very common and no-brainer of simple things like running and actually installing Windows updates or periodic virus scans, and then their machines becomes vulnerable to the hourly-evolving threats of the internet, and then they come whining to me when shit goes bad, and expect me to fix everything.

I have a lot of admiration for those who do this kind of shit for a living, because I sure as shit hate computers that aren’t mine.  But at least they get paid for it, whereas I’m expected to do it under the guise of “family obligation.” 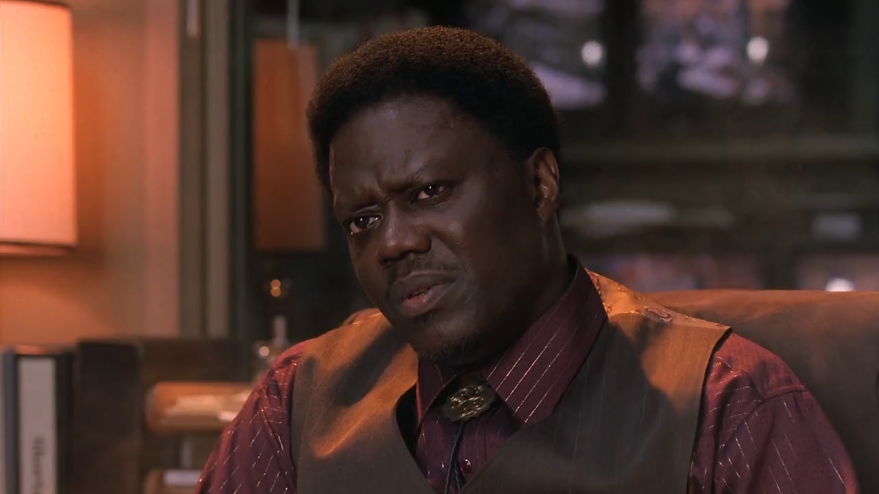 This post helps if you imagine it being yelled to you by Bernie Mac (R.I.P.)

What is WRONG with you motherfuckers that can’t seem to grasp this idea?

I don’t understand men who think it’s perfectly adequate to flush the commode before or during their urination, and then walk away afterward, often times leaving a bowl full of piss behind them.  The fuck is wrong with you people?

Flush the fucking toilet after you use it.  It’s as simple as that.  It doesn’t matter if you flushed it before you used it, flush it again after you used it.  It’s not calculus, it’s not even fucking math.  It’s a simple concept of disposing of your waste for the sanitation and consideration of others.  I will never understand why there are people who can’t seem to grasp this very simple concept.

END_OF_DOCUMENT_TOKEN_TO_BE_REPLACED

It’s the “White Guy” award!! @APkrawczynski: Another from NBA GM survey: @kevinlove is player who makes most of ‘limited natural ability.’

I admit, I hardly pay any attention to the NBA these days, save for a few days in June, if the Spurs are knocking on the door of championship. But it doesn’t really take more than a casual basketball observer to see what’s going on in this situation, when apparently all of the NBA teams’ general managers got together and conducted a little survey about their respective league and its players, and happened to have one particular query called:

Which player makes the most of limited natural ability?

With an overwhelming majority of 24% of the vote, Kevin Love was voted the guy who made the most of “limited natural ability.” Think about that phrase for a second; it’s almost like saying the “fastest paraplegic runner with no legs” or “most capable clinically dead person.” Okay, so maybe those are some exaggerated examples, but there’s no denying the fact that it’s a very backhanded compliment of an “achievement” for NBA general managers to slap onto a guy.

The thing is, I know who Kevin Love is, because in spite of his apparent ability to maximize his limited natural abilities, he’s actually a pretty popular basketball player. Partially due to his propensity to hit some buzzer beaters from time to time and that he’s a pretty good rebounder, but mostly because the obvious fact that Kevin Love is white. He’s a white guy in the NBA, and has a pretty colorful personality to boot, as humorously evident in his candor in blurting out the very obvious as it pertains to his “win” as the guy to best utilize his limited natural abilities.

END_OF_DOCUMENT_TOKEN_TO_BE_REPLACED 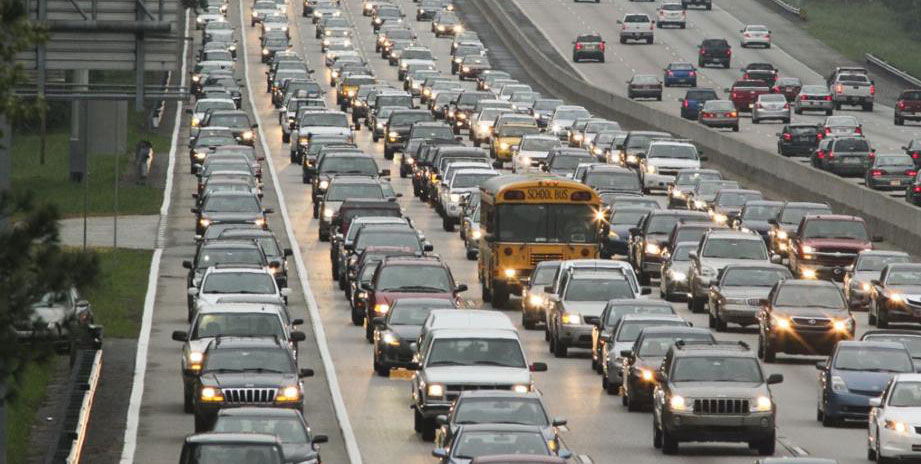 Long story short:  Atlanta’s State Route 400 AKA the toll-road that directly connects Midtown to Sandy Springs is finally getting rid of the toll plazas, and will very soon become a free road to travel.  Many believe that this will ease congestion throughout the city.

Here’s my prediction: traffic on 400 will become worse than ever once it becomes a free road.  When it occurs to every single person who grinds through I-75 to get onto I-285 to get to Sandy Springs because they don’t want to pay the 400 toll, a good chunk of them are going to start taking 400.  In addition to all the people who take 400 on a regular basis, because that’s their daily routine already.

END_OF_DOCUMENT_TOKEN_TO_BE_REPLACED

I have a co-worker who goes by “Dan.” Furthermore, he sits right behind me. Additionally, he also does more or less the exact same thing that I do, except he’s like twenty-five years older than me, addled by a litany of physical ailments and is far less competent and adept at the software we use than I am; this is not opinion, it is genuine fact.

Never mind the old man rants that come from him, reminiscing about the days of when Quark was the standard, and how all today’s Adobe software sucks in comparison, or back when he was in the military, or whenever something political in the news happens and he feels the need to voice his opinion to the rest of our group. My objection with him is simply the fact that he goes by “Dan,” because that’s not his actual name. It’s his middle name.