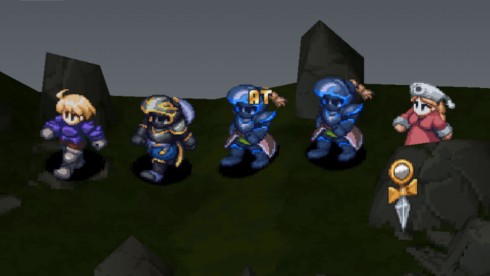 The following was accomplished on Final Fantasy Tactics: War of the Lions for iPad, but is capable of working for all other iterations and platforms of FFT.

Final Fantasy Tactics is pretty much one my favorite games ever. It’s challenging, has a fantastic story to those invested into the game enough to decipher it all out, and is a long, rewarding journey of a role-player. When they released it for the iOS, I purchased it immediately, and it has been my go-to way of killing time on my iPad when I don’t have wifi, and don’t feel like/ are out of books to read on Kindle. I would be Tom Cruise on Oprah or Nintendo 64-kid levels of ecstatic if Square would go on and re-release FFT Advance and FFT Advance A2 for the iOS in the future as well.

Anyway, the game mechanics allow for the player to grind levels from the very start of the game. Due to the fact that all enemies scale with you throughout the duration of the game, there’s never the disparity of exceeding your opposition and being incapable of efficiently leveling. A popular belief is that if you grind yourself to way too high of levels too early in the game, you basically screw yourself, because some of the boss characters become unbeatably overpowered once their levels and abilities are scaled to match your own.

Such is true to some degree, but in the end, no enemy with a finite amount of hit points is unbeatable, and as long as they’re controlled by a fairly predictable AI, they’re still dog food on legs. Personally, aside from my very first foray in playing FFT, I have never had any difficulty in overcoming the game, no matter how much I have maxed out my characters as early as the first chapter.

Once you break FFT, the rest of the game is a breeze. No boss or any particular fight is necessarily difficult once you create at least three or four completely maxed out characters, because you will be able to run roughshod through anyone if you play your cards right.