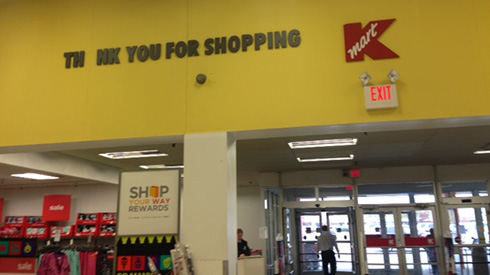 So I was reading this article about how K-Mart is dying, that’s also overflowing with a bunch of depressing pictures of an unfortunate store, and I can’t help but feel a little bit sad for the once prominent giant in the world of commerce.

Given the general popularity of Target, it’s no surprise that K-Marts are getting destroyed by them, but what really has to suck for the K is that they’re also getting dominated by Wal-Mart, which basically has the reputation of like, herpes or something not necessarily fatal, but kind of an embarrassment and a thing that people don’t really want to talk about.  A lot of people really, really dislike Wal-Mart, and personally I don’t really hate them or anything, I just don’t like the fact that a trip to Wal-Mart guarantees you to be there for at least 30 minutes, if for any reason at all, is that there’s never anyone working the cash registers and the one open line is six customers deep, all of whom are buying 50 items.  Wal-Mart is a place synonymous with wasting time, and I do not like to waste time if possible.

But yeah, K-Mart is losing to them too.  Typically I often accuse articles like the aforementioned one of utilizing a bit too much hyperbole in their objective, but it’s hard to argue the points being made in this one, that are backed up in both statistical and photographic evidence.  K-Mart really is dying before our very eyes, and it kind of makes me sad.  It’s not so much the unfortunate demise of a gigantic, long-standing, well-known brand, or the countless people that will undoubtedly be losing their jobs if/when they go under.  No, I’m far too self-centered to really concern myself about that kind of collateral damage, although it would no doubt suck for all of them too.  But it’s the fact that K-Mart is kind of a symbol of nostalgia for me, and to see it crumble and collapse is somewhat a metaphor of the demise of a facet of my childhood.

END_OF_DOCUMENT_TOKEN_TO_BE_REPLACED

Now despite the fact that I like a good weekend every now and then where I literally do nothing but stay at home and play League, watch college football, sleep in until the dog starts barking his need to go pee and living off of whatever’s left over in the refrigerator and pantry, there’s no doubt that it can sometimes be pretty lonely doing such. Not necessarily in the “oh noes, Danny is making another ‘I wish I had a girlfriend’ post” kind of way, but really just being around other people in a fun social engagement in general kind of way, because when the day is over, I’d rather be in good company, chilling out in a relaxed setting.

Such does not occur as often as I’d admittedly like it to occur, but most of that falls on me. I live out in the sticks that are often as surprised as I am to be considered part of the Metro Atlanta area, and it’s a pain to get to anywhere without having to think about niggling details like traffic, time, and fuel consumption in the back of your head sometimes. Also, it’s not that I’m a raging alcoholic by any means necessary, but I do like to drink in social settings, and I’m always paranoid that there’ll be another sobriety checkpoint near my house again, but it’ll fall on a date where I’ve had one or two beers and no designated driver; my dad got a DUI a few years ago, and he’s living proof that no number of decades of safe, immaculate driving record is impervious to the damages a DUI can do, which scares the shit out of me sometimes.