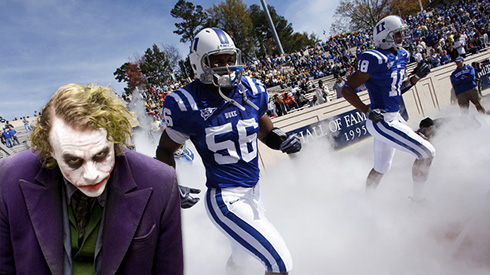 I had a conversation with the one guy at the gym I actually speak with occasionally, about the current state of ACC football, namely the Coastal division that we’ve both got vested interest in, as I’m a Virginia Tech fan, and he’s a Miami fan.  Naturally, I had to rub in his face about how bad the Hokies decimated the Hurricanes last Saturday, but to diffuse the taunting, since he is pretty much a body double for Michael Clarke Duncan and could probably literally throw me head first into the ceiling like a dart, we got to talking about the current ACC Coastal standings.

At the time I’m writing this, the scrubs from Georgia Tech are leading the Coastal with a 5-2 division record, despite the fact that earlier in the year, they jobbed to Virginia Tech as if they were the Honky Tonk Man jobbing to the Ultimate Warrior.  But division wins count more than overall wins, and they didn’t lose to fucking Duke.  But speaking of Duke, they’re tied for third with Miami, both of them behind Virginia Tech.  This is something notable, because we’re talking about football and not basketball, and Duke is very much alive in the bowl selection picture.  And it’s Duke’s unexpected presence in the football scene this season that sparked this train of thought, and it all boils down to the fact that thanks to the ACC Coastal division, the remainder of this season has the potential to be one gigantic chaotic mess; this is typically no different in the overall college ranking systems, but the fact that several bowls can be potentially impacted by the outcomes of two weeks’ worth of games from one division in one conference is pretty interesting.