With the month of March coming to a close, I just wanted to take a moment to go ahead and pat myself on the back, for a month of exemplary brogging.  And by “exemplary,” I really mean “frequent,” but I just wanted to use the word exemplary, because it sounds so much more prestigious and accomplishing.

And really, I do feel sort of accomplished, because if there’s one neat-o thing about WordPress is that it keeps a running count of the number of posts I make each month.  Turns out that through March, I made more posts than there were days in the month; and March is one of those months with thirty-one days, so it’s not like I’m bragging about February or anything.

END_OF_DOCUMENT_TOKEN_TO_BE_REPLACED 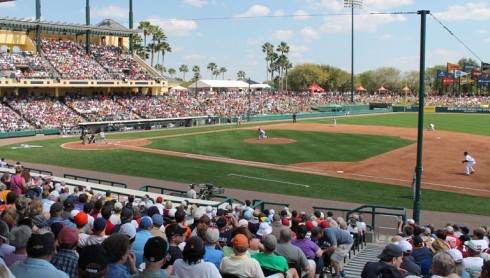 Contrary to the logic of the Dodgers and Diamondbacks having already played two regular season games in Sydney, Australia, and the odd Sunday kick-off game yesterday, the official Opening Day of the 2014 Major League Baseball season is today.  Baseball season has officially begun, and from now until October, the greatest sport on earth is in play.

And I just don’t really care.

END_OF_DOCUMENT_TOKEN_TO_BE_REPLACED 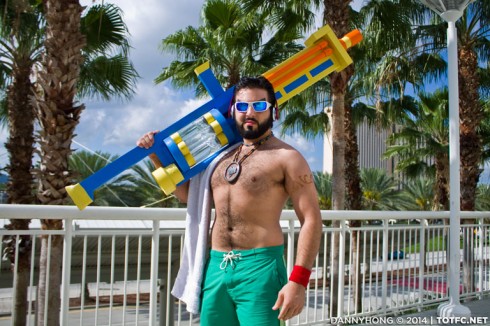 At long last, the MegaCon pictures have been finished.  I’d say it took longer than I had expected, but considering the seemingly endless quest to try to find a happy medium in which I like to display pictures I take, I guess it’s no surprise that it took a full week after all.

In a single day, I managed to take well over 200 pictures, and because I have little idea what I’m doing with a camera, turns out that quite a few were unusable and blown out, because I foolishly keep shooting into the sun, and combined with my determination to competently shoot in full manual mode, mistakes occur.  Regardless, when the smoke cleared, I still had right about 200 photos to share with the world.

END_OF_DOCUMENT_TOKEN_TO_BE_REPLACED

I used to really like basketball when I was younger, but now I really dislike it.  At first, it was the NBA, because after they went on strike in 1999, it was a downhill spiral from there, and it’s stuck in this unappealing mire of bullshit to this day, and still managing to sink further with each passing season (except the Spurs, I ♥ the Spurs still).  College basketball is still superior, but I’m also growing tired of how corporate it, and college football are becoming because of all the monetary potential in them, and how greedy people are leading children down a slippery slope of pursuing quick greed, fame and fortune instead of the educations that they’re often times getting for free just to play sports.

But today, we’re here to talk about the NBA, and namely the tanking that has become notoriously blatant.  If you weren’t aware, tanking is basically when a team loses on purpose, so that they can position themselves in an optimal position in the following year’s draft, with hopes that they can get the first, or at least a top-5 pick, which are usually highly talented, difference-making players.

END_OF_DOCUMENT_TOKEN_TO_BE_REPLACED

Piggybacking onto the opinion I had that John Cena was the biggest diva of WWE’s reality television show, Total Divas, I was watching the start of the new season, and during a segment of the show that was focusing on Cena, I had this overwhelming desire to recreate the show’s logo; but modified to do what the show has pretty much done throughout its entire course – focus on John Cena.

I’m going to attach a vector PDF of this file right here, and it’s my dream that many of the vast WWE universe, especially of the troll-like variety that loves to attend live events and control the fan reaction with clever chants and ironic cheering or booing for guys that creative had not intended to be getting such reactions, finds this artwork, and utilizes it to its maximum capacity.

Not gonna lie, I would die laughing if I ever saw this logo on a sign at a live event, especially if it’s someone close to ringside, where Cena himself might even see it.

No, this isn’t the post with all the pictures; I’m still working on them. I took over 200 pictures in the one day that I went to MegaCon, so it’s taking me a little bit of time to review and process them. I’ll admit that it’s times like this that I miss when the editing process was sizing down a bunch of jpegs that took substantially less time, but at the same time, even though I’m a noob amateur with a camera, the quality of pictures that I’m taking now are substantially superior. I’ll take that trade off, even if it leads to being more time consuming.

Anyway, I’ve got a little bit of time to write, so I felt like jotting down some words about the MegaCon experience, in general, before they vanish from mind, and I’ll feel dumb if I blab on about it way later.

END_OF_DOCUMENT_TOKEN_TO_BE_REPLACED 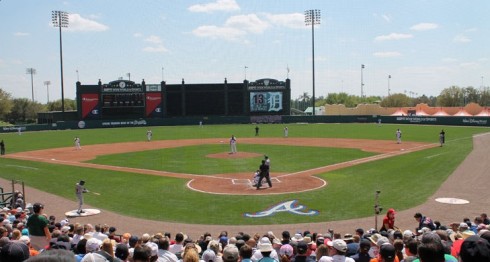 My first ever Spring Training baseball trip brought me down to Orlando, Florida, where I would visit who else but my Atlanta Braves first?  To be honest, Spring Training had never been really high on my priority list, but the idea of taking in some new places, hanging with some friends and most importantly, simply getting away from the routine grind of normalcy made this trip possible.

Although I did enjoy the experience of seeing the Braves’ spring facilities and have zero regrets about making the trip, I have to say that I wasn’t really too big on the place as a whole.  I kind of had a preconceived idea that I might not like it, because the Braves spring facility is located on Disney property, and where there’s Disney property, there’s bound to be massive crowds, a logjam of people, and kind of a hectic atmosphere, all of which turned out to be the case.