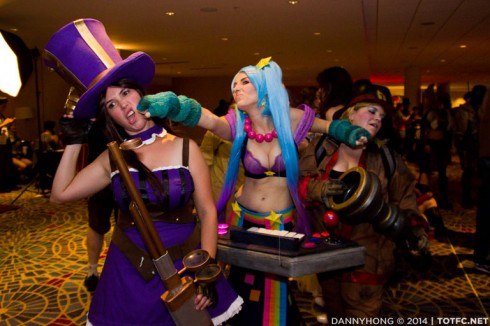 Saturday’s gallery is vastly smaller than what a normal Saturday gallery should be, but that’s entirely due to the fact that I myself was in costume for a good part of the late-afternoon into the evening hours.  Now as much fun as I had being Fifth Age Taric, I’d be the first to admit that I spotted a lot of things that I’d really liked to have taken pictures of, had I not been in costume.  And Taric’s not exactly the kind of costume where I could sneak a point-and-shoot with me to take some B-roll shots, since both my hands are occupied in costume.

Regardless, most of Saturday’s highlights are lots of League of Legends costumes; I wandered around the gigantic group shot area outside of the Hilton, and waited out the group pictures, since to be perfectly honest, I hate taking pictures of monstrously sized groups, preferring more to take pictures of individuals or in small pairs or troikas.

Not saying there’s no pictures of things not LoL-related, but it’s pretty obvious to what has and is my preferred subject to take pictures of.