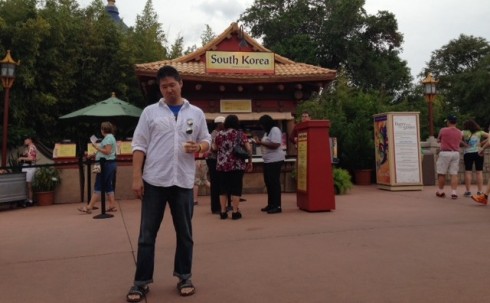 During the brog’s layoff, one of the things that I did was what’s apparently been somewhat of an annual tradition in recent years, which was a trip down to Florida to visit Disney World as well as Universal Studio’s Halloween Horror Nights.

It’s something I enjoy greatly, because I enjoy Halloween-themed events, roller coasters, and ultimately most of the evenings result being spent in Epcot’s annual Food and Wine Festival, which is pretty much one of the greatest events in the world to me, since by the time I’m done with it, I can typically claim that I’ve eaten the entire world, and lots of the countries’ kiosks brings out some excellent quality grub and booze to begin with.

Except for South Korea, which is pretty much the biggest disappointment since like the 2007 New England Patriots. Seriously, just about every booth in the park has people indigenous, or at least of the ethnicity of the country’s booth they’re working for, except for South Korea’s. Furthermore, the food is about as good as one might expect from a place that says “Korea” but has a bunch of white people working it. When your options are the disappointing “Asian” pork taco from last year, and a “Kimchi Dog,” it’s like offering a Mexican person visiting from Mexico, Taco Bell or Del Taco.