It’s that time of the year, where people are under the belief that all the successes, failures, problems, issues, trends and stigmas can all be encapsulated into a box, taped shut, have the year written with a fat sharpie it, and jettisoned off into space, like a new star in Katamari Damacy.  If it were only as simple as that.

Yet, the fact that I write posts like this, at this time of the year, almost every year, proves that I’m really no different in the fact that I tend to write encapsulation posts, even though I don’t think bringing things to light will necessarily give me a nice clean slate at the start of the next calendar year.

But for what it’s worth, I can’t say that 2015 was the greatest of years, but it wasn’t necessarily the worst of years either.  No surprise there, letting the slider dangle back and forth, somewhere in the middle.  Obviously, I have a tendency to think that what I feel surely must be what others feel, even thought that can’t really be the case, but at least me personally, that’s the nature of life, there’s an ebb and flow between the good and bad; it’s just that I think 2015 was slightly more dangling in the bad side, but that’s not to say that there was no good in it at all.

END_OF_DOCUMENT_TOKEN_TO_BE_REPLACED

I’ll try to not get too much into it, but the worst part about my job is the degree of accessibility to me, those involved in each project I’m on has.  I love the fact that I have the ability to work remotely, since this has sparsely been the case previously in my long career as a graphic designer, but at the same time it goes both ways, and being able to remote also means that there’s also expectations that I should be able to work, on a moment’s notice.  Weekends, after-hours, and as was the case through Christmas, on holidays.

Yeah, I’m a little bit salty about that last one too.

However, there’s asking for legitimate revisions, like replacing a name, a typo, an incorrect statement or sentence, and then there’s asking for ticky-tack nitpicks, based on the subjective nature of other human beings with no artistic eye or formal training or understanding of design-related concepts, but because their title and pay-grade is higher than mine, somehow holds more weight.  Unfortunately, the latter is the vast majority of requests to me, and the above graphic is an actual request made.

Try and not get turned on the next time you get home, and pull out your keys to unlock the door.

It’s not that I don’t have a hundred thoughts about the show, and am not capable of vomiting out a thousand words about the show, but honestly, I don’t want to spoil anything, and I highly recommend the show and think that everyone with a Netflix account should go watch it.  And to those who don’t have a Netflix account, should sign up for one, and then watch Master of None.

It’s a fantastic show, and probably the best thing I’ve watched in all of 2015.  Granted, I know such an assessment doesn’t hold that much weight, considering my television habits are like TLC shows like My 600 Lb. Life, 90 Day Fiance, Extreme Cheapskates, and survival shows like Naked & Afraid and Dual Survival.  But I do watch stuff that everyone else likes too, like The Walking Dead!

END_OF_DOCUMENT_TOKEN_TO_BE_REPLACED 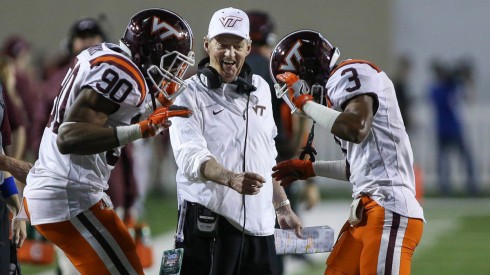 When Dadi Nicolas engulfed Tulsa’s quarterback with a monster sack on 4th down and the game on the line, to effectively seal the game, I threw my head back and let out the mother of exhaling sighs.  Absolutely nothing would have been more disheartening than seeing Frank Beamer go out on a loss, especially to a school that I had to check Wikipedia to verify whether it was a Division I or II program (D-I).

But a win is a win, and much to mine, and every Virginia Tech fan’s relief, Frank Beamer ends his legendary career, with a victory.  And just like that, the most illustrious chapter of Virginia Tech football comes to a close.

It was interesting watching Beamer on the sidelines throughout the fourth quarter of the Independence Bowl; at first, with the Hokies up fairly comfortably, there was a man watching with a deadpan look on his face, almost as if he were watching the clock tick down not just the seconds of the game, but his career.  When Tulsa scored a billion unanswered points to close the gap, the only change on Beamer’s face looked like an expression of “oh shit, here we go again,” with a small mix of “am I really going to go out like this?”  But even after Nicolas’ sack put the nail in the coffin, and the game all but sealed, was a man who was not excited, but more melancholy and almost even a little scared at the sinking reality that the ride was coming to an end.

END_OF_DOCUMENT_TOKEN_TO_BE_REPLACED

When things get busy, I tend to make lists.  Be it on a Post-It, notepad documents, or on Notes on my phone, when there are a lot of things to do, I make lists.  Because one, it keeps me organized and remembering all of the things that I need to do, and two, it feels really nice and accomplishing when you’re able to cross things off, highlight and clear lines of text, or delete a Note.  It makes me feel happy when I knock things off a list and feel a sense of accomplishment.

With Christmas looming, I made a list of things that I needed to do on my car, prior to the holiday.  The oil was long overdue, subsequently the air filter was gross and needed replacement, and my car’s at the age where all the bulbs seem to be burning out one after another.  Pretty much in one 24-hour span, I’ve gotten the oil changed, the air filter changed (myself, saving $20 in exorbitant “labor”), and replaced three burnt-out light bulbs.  For all intents and purposes, I feel very studious and accomplished at my productivity, and should worry less about driving my car anywhere for the next few months.

In fact, on the overall list of things that I needed to do before Christmas, I’ve systematically completed almost 90% of the things originally listed.  “Bathe dog” and “finish X” are the last things left that I’m aware of.  I do feel accomplished, and pretty good that the remaining things are manageable and well within sight.

END_OF_DOCUMENT_TOKEN_TO_BE_REPLACED

I came across this article that shed some light on Xavier Woods UpUpDownDown YouTube channel, just days after I stumbled across it myself, and it got me thinking about just how invaluable Woods must be to the company, whether or not they realize it themselves.

The interesting thing about such an assessment is that not a whole lot of it involves Woods’ actual ability to wrestle.  As high as I am personally, on Xavier Woods, the fact of the matter is that ultimately, he’s a pretty mediocre wrestler, or as much as the WWE will actually let him do, given their propensity to inhibit guys from cutting loose completely, due to fear of arsenal overlap.

But from what I’ve seen since his main roster debut, even to what he does in the ring now, there’s no denying that Xavier Woods might be an 11 on the microphone, I’d say that his ability in the ring is still somewhere around a 6-7; and that’s mostly on his strong ability to sell, and his general exuberance.  There’s a very obvious reason why the vast majority of The New Day matches are handled by Kofi and Big E.

END_OF_DOCUMENT_TOKEN_TO_BE_REPLACED

Sometimes, a story comes along, where all integrity just ceases to exist, due to the overwhelming presence of money, introduced into the scenario.

Case in point: the mythical girlfriend pointed me towards this ironically horrible story, where the only possible reaction is to laugh incredulously at the absurdity of it, and the subsequent resolution.  But in short, a Saudi man is accused of rape, whereas he claims he tripped and fell on top of an 18-year old girl sleeping on a couch, and oh yeah, penetrated her and left traces of semen inside of her.

Never mind the absurdity of the physical scenario of a grown adult falling on top of a teenager, as well as the off-chance that he just happened to have a stiffy that just so happened to conveniently accidentally enter a vagina.  And I guess in his panicked attempt to withdraw as soon as possible he just happened to have the stamina of a 13-year old finding Cinemax after 11 pm, and blew his wad in the process.