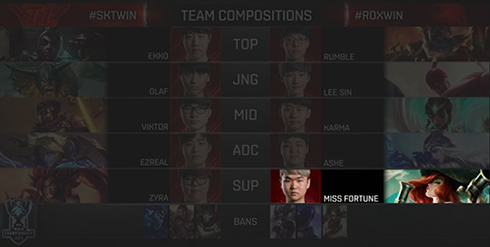 Every Worlds, there’s always a not-popular/meta champion pick that emerges from some team, usually from Korea, that takes the tournament by storm, or is effective enough to surprise out some critical victories.  Sometimes they’re picked against lesser opponents so that players can hide their hands and not reveal their A-games to those stronger challengers scouting in the wings, or sometimes they’re busted out at a critical juncture of a series to catch the opponent off guard, and by the time they understand what is happening it’s too late.

Every year, there’s always one or a few picks that are remembered for its breaking of the meta, and outside the box thinking, or sometimes just plain goofy audacity, that sometimes works because nobody is expecting it.  In Season 3, OMG’s LoveLing bust out a jungle Volibear that completely blindsided TSM en route to a 43-13 drubbing.  In the Season 4 Finals, Royal Club’s inSec selected Rammus to jungle, and although his line score didn’t look that impressive, he most definitely contributed to Royal’s only win before ultimately succumbing to Samsung White.  And then there was last season SK Telecom T1’s Faker going all the way to Jupiter to select Olaf to play in mid lane (link above), and then still throttling a completely lost Bangkok Titans squad who inexplicably tried to go bruiser-vs-bruiser against Faker by picking Irelia mid.

It’s a legit strategy when it comes to League of Legends, since there are just so many available champions to pick from.  No matter how infallible or statistically reliable some champions are, out of 150+ available, there’s going to be one that’s an effective counter somewhere.  And the players that hide them in their hands until critical points are legit risk takers, choosing to unleash them when the stakes are high.