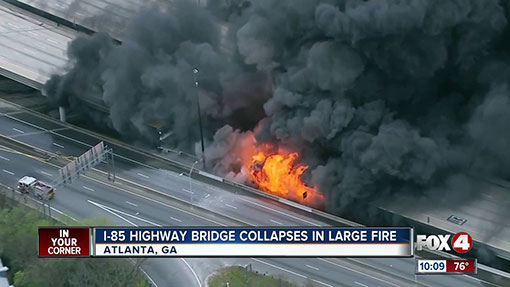 A major and historical in the worst kind of way thing happened in Atlanta this past week, when an entire block of I-85, well, broke.  A massive fire started underneath the bridge portion of I-85, and for whatever unfortunate reasons, the joints holding up a chunk of the interstate, basically fell off, leaving a sizable and impassable hole in the bridge, severing the stretch of highway that connects Montgomery, Alabama all the way to Richmond, Virginia, going northbound.

The fallout is fairly substantial, and the repercussions of having an impassable chasm are massive.  Anyone going northbound in, or through Atlanta will now have to reroute on either I-75 or just taking I-285 around the city.  GA-400 isn’t accessible going north anymore, because the hole is quite literally right before the exit to 400 North.

Sure, I’ve made plenty of jokes about how the hole basically reminds me of the bridge jump from Speed, or how the fires were basically when Tyrion Lannister used wildfire to blow shit up, and the internet has once again made a mockery of Atlanta and it’s apparent penchant for stupid shit like this.  Fortunately, nobody was hurt and there were no casualties aside from thousands of pissed off commuters, otherwise such might be in bad taste.  However, the reality of the situation is that this is going to be a massive and inconveniencing situation for all of Atlanta, and those who need to pass through Atlanta.