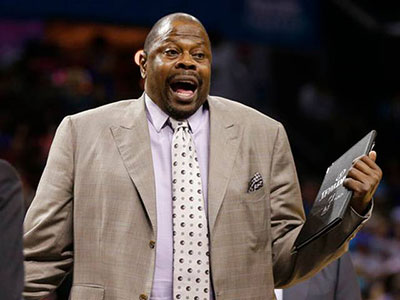 I know baseball just started today, and naturally the Braves begin the season with a loss, in spite of a pretty impressive pitching duel being Julio Teheran and Noah Syndergaard, but if there was one sports headline that caught my attention more than anything else, it was the announcement made by Georgetown University, declaring that the next coach of the once-vaunted Hoyas, would be none other than Georgetown alum, and former NBA player, Patrick Ewing.

I know that Patrick Ewing basically carried the Hoyas to their only national championship back in like 1984, so I get why they think that he has the pedigree to lead the school’s basketball program into a renaissance, but I don’t really think that they really thought about what his career amounted to after he left Georgetown.

I won’t deny that I was a gigantic Knicks fan back in the 90s, and at one point I even had a Patrick Ewing jersey.  But there’s also no denying the sheer amount of failure endured by Patrick Ewing throughout his professional career; losing the 1994 NBA Finals, the missed finger roll in 1995, watching the Knicks flourish in his injury absence in 1999 and making the NBA Finals, only to lose as soon as he was reactivated to play, and about the 766 times he was tormented and owned by Michael Jordan and/or the Chicago Bulls throughout his career.

Make no mistake, there’s pretty much nobody in the history of basketball that symbolizes failure, falling short, dashed expectations and broken dreams more than Patrick Ewing.  I wanted Patrick Ewing to get an NBA ring more than anyone back in those days, as a member of the Knicks.  But year after year, the ring never came, and the window of opportunity opened and shut in the span of my formative years.  I watched MJ crush his hopes, then Hakeem Olajuwon, then Reggie Miller.  And then Tim Duncan showed up and emerged to stamp nails into his Knicks career before he started bouncing around the NBA to teams like Seattle and Orlando.