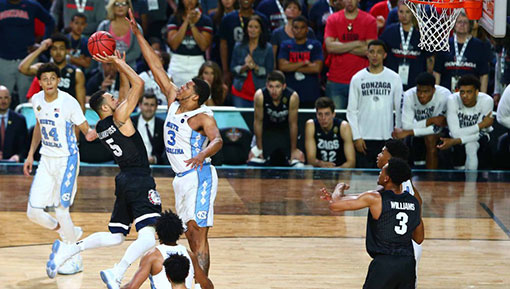 If there’s ever any reason why college basketball is so often lauded as amongst the most exciting of sports is that it’s seldom that its annual national championship is ever decided in a decisive or completely unanimous manner.  It doesn’t matter if a team goes undefeated throughout the regular season, they will inevitably run into a serious contender be it a team from another conference, or the Cinderella story that’s making a miracle run, or a team that hatched the perfect plan to counter them, or sometimes all of the above.

The 2016-2017 National Championship game seemed kind of lackluster in the sense that it featured two #1 seeds, in Gonzaga University against the oft-present University of North Carolina, especially since the Zags took down Cinderella in the Final Four when they took out South Carolina and UNC dropped Oregon who was having their own surprisingly deep run in the tournament.  But few people ever want to see two #1s going at it for the National Championship, since that’s kind of the expectation, and sports fans typically want to see the unexpected, the Cinderellas, and the underdogs prevail.

But as is often the case with the National Championship, the game was definitely no snoozer, and despite the claims and the accusations that Gonzaga was a paper #1, meaning they didn’t really deserve their rank on account of playing in a weak conference, especially in contrast to their opponents who plays in the ACC against very strong basketball programs like Virginia, Louisville, Syracuse and Duke, they still showed up to play, and gave UNC tremendous resistance in a hard-fought, foul-plagued and ugly slugfest of a basketball game.