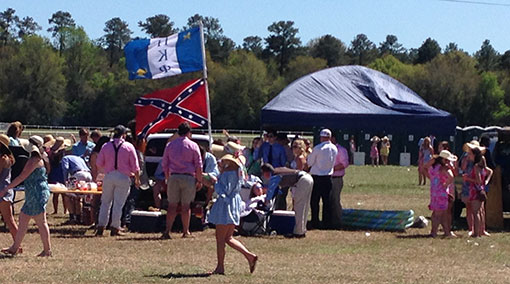 Last weekend, mythical gf and I went to South Carolina to see the Carolina Cup, which is a series of horse races.  Leading up to what, I have no fucking clue, but it was billed to me as an event of drinking, eating, drinking, socializing, drinking and if you’re lucky, you might even get to see a horse run by.  I mean, it sounded like a good idea to me, honestly.

Now I don’t intend for the title of this post to imply that I did not have a good time, quite the contrary, I enjoyed myself a good deal, and I would be happy doing it again in the future.  But make absolutely no mistake that the headline is 100% accurate, and of all the things I’ve ever done in my life, there is without any hesitation, question or debate that this was undoubtedly the whitest thing I’ve ever done.

Men frolicking around in linen suits and/or khaki everything, with shirts featuring more pastels than Crayola’s Easter crayon collection.  Women wearing gaudy dresses and gigantic doofy hats.  And food and alcohol pretty much everywhere, and for an event that’s revolves around four horse races, people bring enough to indulge for at least sun up until sun down.

END_OF_DOCUMENT_TOKEN_TO_BE_REPLACED

I don’t pay nearly as much attention to baseball as I once did, despite that we’re living in kind of the era of the immediate, where tweets, alerts, push notifications and other means of instant communication exist to stay on top of things very easily if one really wanted to, like baseball news.  Often times, I miss out on Braves news much less any news around baseball, because I simply am not that deeply involved like I once did, and everything that happened in the baseball landscape was something I wanted to know.

However, among the things that I regularly Googled and checked on from time to time, was one of the pitchers that I really, really enjoyed watching and was a fan of: Jonny Venters.  Long story short, he was once an unhittable relief pitcher on the Braves, utilizing a left-handed power sinker from another planet, and even achieved All-Star status for his immense talent.  But the injury bug struck, and he underwent the dreaded Tommy John elbow surgery, and eventually he was released by the Braves.  Didn’t matter where he went, I knew that I was going to root for Jonny, and so I always kind of kept an ear to the ground even when he was signed by the Rays, fully knowing that it was going to be some time before he was cleared to pitch again.

Last summer, things looked really optimistic, and Jonny Venters made his way into the minor leagues to work his way back up.  Personally, I was stoked to see him taking the mound again, and I grew excited at the prospect of him getting back into game shape, and then getting called up by the Rays, who would unleash the power sinker from the left side onto the mostly unsuspecting American League.