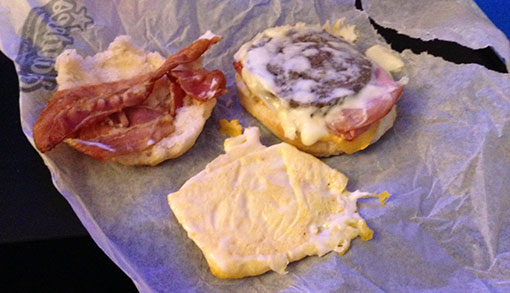 Surprise of the century, Hardee’s Aporkalypse biscuit was hardly the culinary miracle that fast food marketing attempts to make it sound like it is.  I mean, it’s not like I was expecting the greatest breakfast menu item in history, but it’s almost meme-worthy just how much this fell into the category of marketing versus reality.

Eating satisfaction-wise, it’s actually decent.  Sure, they ignored my request to put no egg on it, but since Hardee’s uses a washcloth folded into fourths and calls it an egg, it’s easy enough to remove without fear of any embryo remnants wrecking my digestive system for the afternoon.  But combining bacon, ham and sausage and drowning them in two cheeses is pretty self-explanatory when it comes to satiating a fat guy’s craving for a breakfast biscuit.