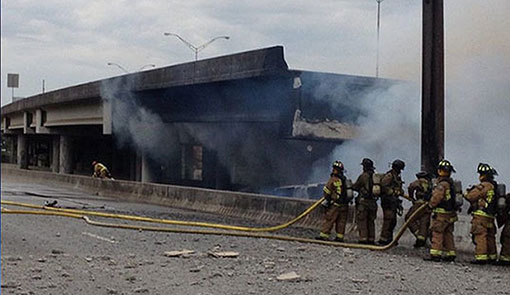 Conspiracy theory alert*: A crackhead was blamed, crooked bureaucrats’ public waste was the fuel, but MARTA lit the match

*this post is tongue-in-cheek (partially), as if I really have to explain myself

One of the snarky observations I made when I heard that the repair of I-85 was going to take until like Thanksgiving, was who stands to benefit the most from this?  And I don’t think I’m entirely wrong with thinking that, because as most Americans know, little is done in the United States for free, regardless of the circumstances behind them, and as accidental as the burning and collapse of I-85 was, someone(s) will undoubtedly walk away from the scenario richer than they started.

From the onset, I would’ve suspected that part of the delay of repairing I-85 would be the extensive time it took for bureaucrats and talking heads to debate, broker and spin deals with crony companies to contract out the labor work for the bridge repair, to see how many people could pad their pockets as much as possible, before any work was actually planned much less executed.  Naturally, these involved parties would the ones who would somehow take a disaster and turn it into a money-making endeavor, regardless of how miserable it’s making citizens and travelers with each passing day with a giant hole in I-85.