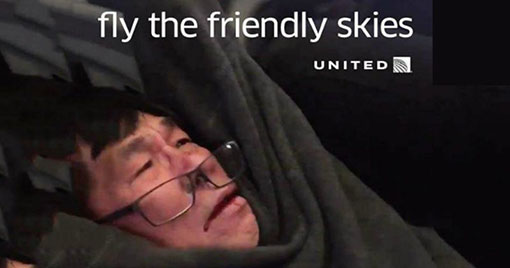 I think that unless you’re living under a rock, most people have heard now about the United Airlines debacle where a passenger had his seat “re-accommodated” which was apparently corporate-ese for “physically removing from aircraft by means of yanking them out of seat, bashing their face into an arm rest and dragging a bloodied body away while numerous other passengers video record the whole incident and let it go viral on social media.”

Yes, it’s truly horrific that this happened, yes, United Airlines has found seemingly the worst possible combination of choices in a field of many, and yes, United Airlines is already in the fallout of a lifetime having lost at the time I’m writing this nearly $1.4 billion in lost stocks, sales, partnerships and other financial channels, with the number continuing to escalate as the saga continues.   By now, we’ve seen the videos, we’ve read the crocodile-teared apologies, and seen the endless litany of hilarious memes.  We’ve all got our opinions about United Airlines, and our own thoughts on the story that we know of.

Most are appalled by United, and probably would make a conscious effort to avoid them moving forward, and that’s completely understandable.  Lots of people feel bad for the man, basically targeted, assaulted and basically a sacrificial lamb in this captivating story; it also doesn’t help that he was a minority, although imagine how much worse would this story be if he were black?  And just about everyone by now has had a good laugh at a meme about the situation that has probably created way more awareness to the story than there would’ve been from people who simply pay attention to the news.