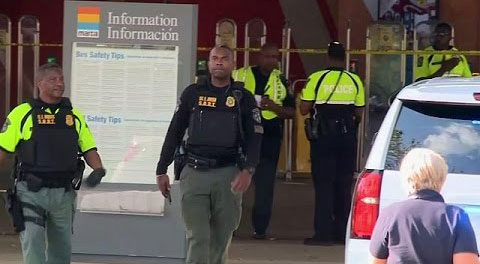 Sometimes, nature just takes care of itself: an apparent premeditated gun attack at the West Lake MARTA station results in one dead, several others injured

Yeah, about that thought that maybe MARTA planned the destrucity of I-85 in order to spike its ridership… such may have been the case, but much like using a cheat code Battletoads, sometimes the royal they know that something is amiss, and actions are taken to bring light to it.  MARTA destroys I-85 in order to increase their ridership, and then violence occurs on the trains to take the status quo back to zero; or at least that’s what the point of this whole post is about.

Surely, nothing is going to scare people back away from MARTA than good old fashioned gun violence.  Completely negating the efforts by MARTA to increase their ridership by destroying I-85.  But compared to the risk of getting hit by, stray bullets, I think commuters just might prefer setting in stand-still traffic for hours on end; at least in the confines of your own car, the chances of getting shot are less than being crammed shoulder to shoulder inside of a train car with no automotive skin to shield you from gunfire.