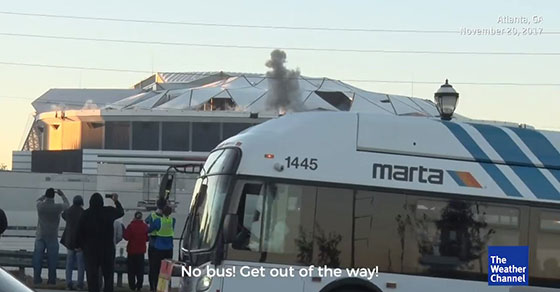 Obviously, I can’t have entitled this “Oh, MARTA #1,” because I’ve been chronicling MARTA fuck up stories for a few years now, but at the same time, I didn’t feel that this particular incident could just be summed up in the arbitrary numbers that I make up on the fly that make it sound like MARTA fucks up way more often than they actually do although it’s not really that much of a stretch to believe if they did.

So much like they do in comic books or any sort of regular periodical, I figure to just let’s just call this commemorative #100, because it truly was a MARTA incident that can’t simply be recognized with some made-up number.

As the story goes, since it all happened while I was overseas, the long-awaited implosion of the Georgia Dome, as covered by The Weather Channel, had their video feed utterly and completely ruined by a MARTA bus that just so perfectly timed its arrival into the shot right as the initial charges went off and the Georgia Dome came crumbling down.  Usually, I like to believe that I’m capable of coming up with way better headlines and descriptions of events than popular media does, because I don’t have to play by the rules of censorship or any sort of policing.  But when scuttlebutt declared the event as “The most Atlanta thing to ever happen” or something along those lines, I simply had to shake my head and just agree.

Seriously, I can’t really think of something more symbolic of Atlanta than a MARTA bus photobombing a momentous occasion.  And you know the driver had no fucking clue of its actions, as it was probably some wage slave just doing their daily job, trying to keep to the schedule and continuing to move . . . people, routinely through Atlanta.  But to the people at The Weather Channel who were completely banking on this footage, this was a cockblock that not even a Michael Cera film could have possibly executed.