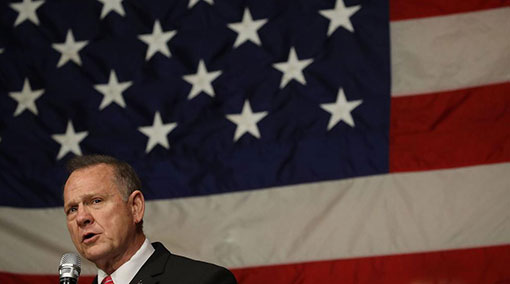 I don’t really like to talk about politics, but I just read an article about how Alabama senate candidate Roy Moore was quoted stating something about how he believes that the last time America was great, slavery was still in existence.  The same Roy Moore who has also been in the crosshairs recently for alleged sexual misconduct with underage girls.

However, this is also the same Roy Moore, whom in spite of these discouraging associations, is not only not out of the running for the senate seat, but statistically neck-and-neck in the race with Democrat Doug Jones.

All I can really deduce from this absurd notion is that red state Alabama’s conservative voters are so against a Democrat gaining some measure of power, that they’d knowingly and willingly continue to vote for and support a pretty known sex offender and seeming racist Republican on their own volition.

This isn’t so much a discussion about politics as much as it is revisiting the frequent topic these days of where human values have gone, really.

So yes, the headline is a serious question: what would the state of Alabama be reduced to if college football were removed from the equation?  As fanatically blind and brainless as the voters are in the state, there’s no shortage of blind loyalty and prestige that the success of college football brings to the state.  But if the University of Alabama and Auburn University either bottomed out permanently, or ceased to exist, what would the state of Alabama really have left?