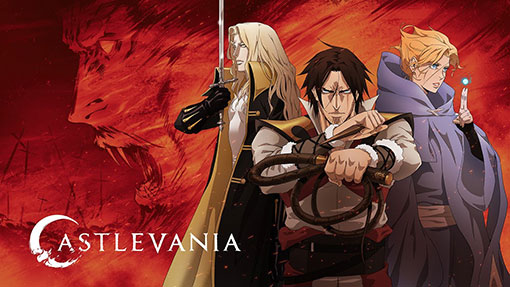 Blink, and you just might miss it; that’s how I felt after the fourth episode of Netflix’s animated Castlevania’s credits started rolling, and instead of the next episode in 3..2..1.. prompt, it was a preview for something else, signifying the end of the series.  Right there, it became abundantly clear that just four episodes were ordered with the intent to gauge interest and test the waters before a more comprehensive commitment would be made.  Which is kind of ironic in itself, since Netflix and online streaming services are typically the platforms in which longform series tend to get their chance to let viewers, and now they’re pulling the network-like process of short test runs to see if something is worth it.

But for what it’s worth, I liked it, and I was pleased to discover that more episodes have already been ordered.  Castlevania III: Dracula’s Curse was always one of my favorites in the series, and based on the fact that Netflix’s series revolve around Trevor Belmont, Sypha Belnades and introduce Alucard, it’s pretty clear where the source material is coming from, which lit my fanboy’s enthusiasm upon realization.

It is interesting to see something based on a storyline from my childhood, but fleshed out and explained to me as an adult; the Castlevania canon tends to get a little convoluted, and I admit that I stopped playing the series outright in the midst of Symphony of the Night, because when I realized that I had to basically play the entire game over again in an upside-down castle I was like naw, fuck that, and haven’t really looked back at the games since.  But Castlevania III is a property that I was all too familiar with, so it was really easy to get into the Netflix show.

Back when I was a kid, there wasn’t much thought to the plot: Dracula is ruining shit, and Trevor Belmont shows up to fight against it.  The Netflix Castlevania fills in the gaps in the plot that an old NES cartridge either fails to deliver and/or nine-year olds simply can’t comprehend, and it’s way more compelling than when I was sitting on my ass plotting on how to avoid hits and whether or not I was going to take Grant on this journey or try to finish the game with Sypha (never took Alucard, because he sucked).  But I never thought to why Dracula is waging war on humanity in the first place, and why Trevor Belmont was needed to come save the day in the first place.