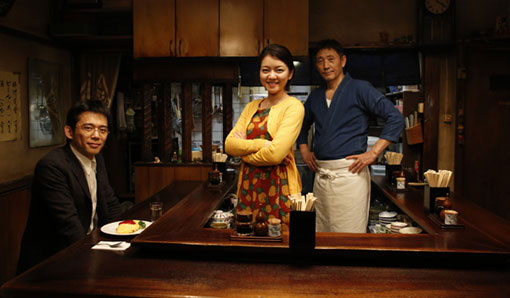 A show I’ve been enjoying a lot lately has been Netflix’s Midnight Diner: Tokyo Stories.  It’s apparent that I’m very favorable to slice of life types of shows, and at just ten episodes that aren’t even a full 30 minutes, it’s the perfect kind of show for me to watch an episode here and there, or watch several in a row, and walk away from the screen feeling moderately pleased with life.   There’s no really other way to describe it other than the fact that it’s a light show that puts me in a good mood while watching it.

There’s one particular episode that I enjoyed a lot, that revolved around the budding relationship between a Japanese physicist and a girl from Korea working in Tokyo, and how their shared love for fried rice omelets is the link that brings them together.  It deals with the taboo perspective of Korean-Japanese relationships, and how easy it is to criticize and pass judgment from the sidelines as opposed to those who are capable of seeing past them.  And all in like 25 minutes, which means the characters are introduced, a conflict is established, and then the episode winds down, giving me more time to do other things, which usually ends up watching another two episodes of Midnight Diner.

Anyway, aside from simply enjoying the show, I look at the Midnight Diner itself, as the kinds of places I love discovering and going to.  And I haven’t even been to Japan.  But anywhere, really, whether it’s in the United States or any other place in the world I’ve visited.  I love charming little eateries, where the cooks are masters of their small menus, and only hit home runs.

However, when I do visit Tokyo one of these days, I hope like hell I’ll find a place like the Midnight Diner, and it would probably be the highlight of my trip if I actually did find one just like it.  I don’t stay up too late these days, but I’d be more than willing to capitalize on some jet lag and try to find a place open 12-7 am if were anything like the show’s place.

It’s a great show for those who like slice of life anthologies, or just want to watch something very quick, short and relaxing.  I know I’ll be disappointed when I finish the series, and have to go back to the drawing board to find something as simply enjoyable as Midnight Diner.

I joined a cult.

I purchased an Instant Pot.

A little while ago, I stumbled across this particular page, and I was immediately intrigued by the effective photography showing a French dip sandwich, and a hearty looking Italian soup.  As I read through the page, I discovered the existence of this seeming Jesus-level appliance known as an Instant Pot, that was a capable of pressure cooking a wide variety of delicious looking foods in fractions of the times they would normally take if cooked traditionally.

Whole chickens and pot roasts and corned beef in less than an hour?  Just throw shit into the pot, press a few buttons and wait like 15 minutes for the food to cook?  Color me interested.

Anyway, the saturation of Instant Pot on social media and the rest of the internet was no help at resisting the allure of possibly getting one, but the final straw snapped when I just so happened to be out and about bouncing around antique stores, and then I came across this one indy store and I found out that they had actual Instant Pots at reduced costs.