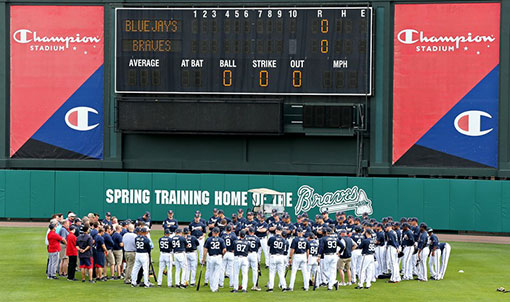 Less surprising than Grayson Allen tripping someone again despite saying he’s grown out of it, the Atlanta Braves’ spring training saga yet continues on, this time revealing that the team has signed an extension with the Disney Wide World of Sports for the 2019 season, with the writing between the lines meaning that the new facility in Sarasota, won’t be finished in time.

Who would’ve thunk it?  That in spite of the $100M+ budget and all the promises and plans in the world, the magical construction of an entire facility in a calendar year seems to be viewed as potentially unrealistic.

In all fairness, the Braves do deserve a little bit of credit at identifying the potential for failure this early, and moving forward with a logical contingency plan.  And as much as I bet Disney would have loved to have turned the screws to the Braves and told them that seat’s taken and that they would have to find somewhere else, the reality is that almost all of the teams in the Grapefruit League want to be in a coastal town, so Orlando is kind of screwed for Spring Training once the Braves depart.  So clearer heads prevailed, and the Braves get one last partial Spring Training at Disney, and Disney gets to cash in on that sweet MLB money for one more spring.

But it’s still a failure in the sense that the Braves made all these grandiose plans and basically gave Disney their walking papers, but when their shit started to seep through the cracks, they kind of had to crawl back to the hand that’s been feeding them for the last few decades for their safety net.