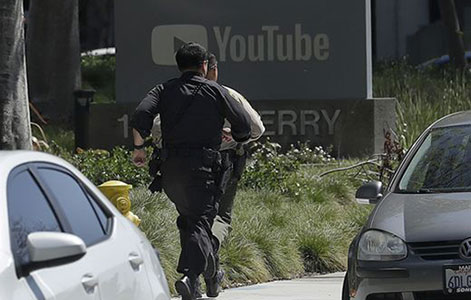 Well, that didn’t take long.  Leave it to the internet to accept any challenge whenever anyone thinks they’ve hit a low point, to somehow continue to find more ways to test peoples’ opinions on humanity further.

By now, I’m pretty sure most people heard about how a shooter converged on YouTube’s headquarters in San Bruno, California and wounded three people before supposedly killing herself afterward.  She was apparently really, really pissed off about how she felt like her First Amendment rights were being violated, so she flexed her Second Amendment right to bear arms and take it out on a bunch of people, most of whom probably had nothing to do with content suppression or the censorship of her stupid “channel” that wasn’t nearly as big of a deal as she thought it might’ve been.

Man, to think back in the day (2017), if you had a dispute with a company and they weren’t paying you, you first try to settle it by yourself, and failing that, get a lawyer, contact the Better Business Bureau, etc., etc., and try to settle it legally.  But nah, forget all that time-wasting shit, let’s just go out and get some guns and shoot up their offices.  That’ll get you paid real quick.

Either way, yet another shooting spree on American soil just occurred, and to nobody’s surprise, society’s gotten so desensitized to this happening that it’s pretty much already secondary news by this point.  Probably because there weren’t enough casualties save for the shooter herself, so there’s not enough bleed for this story to lead, for long enough.