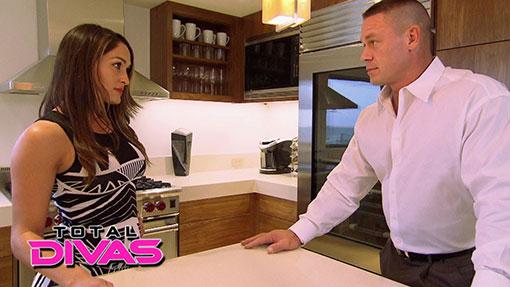 I have to admit that I’m a little surprised at how much mainstream media coverage the breakup between John Cena and Nikki Bella has been, because no matter how big or small wrestling gets, performers in the industry seldom make any mainstream media unless it involves them dying or they’re The Rock.

I can’t say that I’m the least bit surprised that this happened because ultimately I don’t believe that people are really capable of change without some traumatic or life-altering instances happening in their lives, and considering John Cena’s life and career has been mostly the same over the last decade, I’m pretty sure that regardless of what ear candy he’s said about having changed towards the ideas of marriage and children, he really hasn’t.  As much as sucks for Nikki Bella or any person who has to endure a breakup with a long-term love, it’s hard to say that John Cena wasn’t being transparent about his attitudes towards certain things, for quite some time now.

Sure, it’s probably a dick move that he proposed and let this roller coaster ascend to the heights it did mostly because of the fact that Cena is a moment-junkie, in the sense that he’s completely sold on the notion that Wrestlemania is where “moments are made,” and he probably went a little too far in the pursuit of a moment and proposed marriage despite the fact that he was against marriage, but frankly as much as it sucks right now, it’s probably for the best that they ended things now instead of after being married and possibly with kids that also Cena would have been against in the first place.  Sure, Cena would have obviously protected himself with a pre-nuptual, because he wouldn’t even let Nikki move in without any sort of contract, much less married her, but divorce regardless is undoubtedly messier than a breakup between non-spouses.

At first blush, my knee-jerk reaction to this news was that it was the seeds to what could possibly be the first real swerve towards an audience beyond just the wrestling fanbase, considering that both John Cena and Nikki Bella have transcended the wrestling industry with movies and their reality television shows.  If the WWE played their cards right, it would be a golden opportunity to get people outside of wrestling fans to possibly tune into flagship programming and/or tie themselves into WWE Network subscriptions, because they’re drama junkies eager to see the blurred reality of the fallout of their breakup – but in the ring.

Now more level-headed thinking probably understands that this is probably more on the side of reality, since despite his in-ring persona, John Cena is barely anything other than a robotic tool, moldable to promotion and malleable to anything that can continue to make him look like a superstar, and getting married and being strong-armed into having kids would definitely compromise his stardom potential.