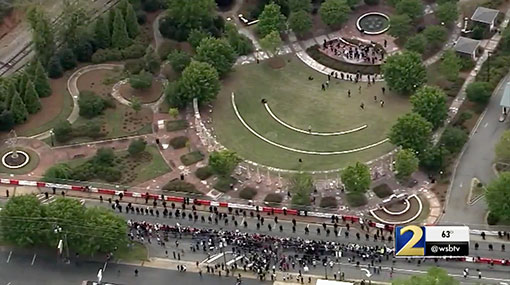 I knew they were a bunch of pussies: the National Socialist Movement AKA a bunch of Neo-Nazis planned on holding a rally in Newnan, Georgia on April 21st, 2018, but word of their gathering seemed to have been revealed way too early, and facing massive opposition and counter-protesting, when April 21st rolled up, only like, 25 Neo-Nazis actually showed up.

I kind of wish I cared enough to seek out the message boards or the online chatter among the National Socialist Movement as April 21st approached.  I imagine at some point, it was decided that Atlanta would be a great target region to hold a rally, but obviously not too close to Atlanta, because Atlanta has a lot of black people and other minorities, and when it really comes down to it, they’re a bunch of pussies and don’t really want to go toe-to-toe with actual real life black people.

So they chose Newnan, a suburb nearly 40-50 miles south of Atlanta depending on where you decide to start or end.  Because it was close enough to Atlanta to draw the local media, but it was just far enough outside of the city to where they might be able to still attract country bigots and be far enough away from the blacks – or so they might have had second thoughts about, considering only like 25 people actually showed up.

I want to imagine that there were conversations about how Newnan wasn’t completely exactly like Charlottesville, and that Richmond and Atlanta, the two major cities they tried to troll, have a pretty big difference in number of scary black people in them.  And then be it through message boards or Facebook Live chat rooms or whatever means of communication the Neo-Nazis prefer using, they begin bickering and second-guessing each other about whether or not it’s a good idea to converge on Newnan or not.

After all, word of their gathering became news as soon as the very start of April, and three weeks is more than ample time for hostile counter-protestors to immobilize, organize and plan to meet them when they get there.