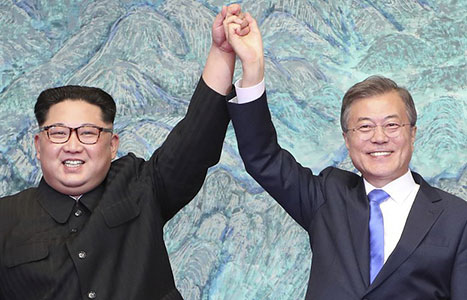 Throughout my entire life, the Koreas have been at war.  The same can be said about just about all of my peers, friends and acquaintances.  Obviously, this doesn’t mean that there’s always been continuous combat for 36 years, but in the technical terms of the Korean Armistice Agreement of 1953, the fighting may have ceased, but the Korean War had never ended.  It’s safe to say that large chunks of the world’s populations have never known of a world where the Koreas have not been at war.

So it’s kind of surreal, almost strange, and definitely unbelievable the recent news of North Korea’s Kim Jong-Un meeting with South Korean president Moon Jae-In, and coming to terms and signing a peace treaty declaring a formal end to the Korean War.  It’s treading into waters that most of the world has never seen before, and it’s kind of amazing to think that babies born beyond April 27, 2018 will be coming into a world where the Korean War was not technically happening.

Seeing as how I am American by birth, and as authentically Korean as a Hyundai assembled in Mexico, I’m a little surprised at how much the news of the Koreas ceasing the war affected me.  I’ve only been to Korea twice, and know a pathetically paltry amount of the history of my ancestors.  Yet, reading news and progressions of the peace summit at Panmunjom really made me feel genuine hope, positivity and a swelling of emotion from within that I think I can only really explain as a result of my Korean heritage.

I know there are tons of people who are skeptical and untrusting of North Korea, and I’m most certainly not without my own skepticism and conspiracy theories of what might actually be in the works.  There are allegations that North Korea really fucked up on a missile test and took down a mountain, destroyed a major developmental facility, nuclear fallout, or all of the above.  There are theories that the escalating trade tensions between the United States and China have unintentionally begun to choke out North Korea’s primary trade partners, thus making them suffer, forcing them to become desperate and take these measures.  Both are somewhat logical and justifiable to why seemingly out of the blue, North Korea has been open to meeting with South Korea.