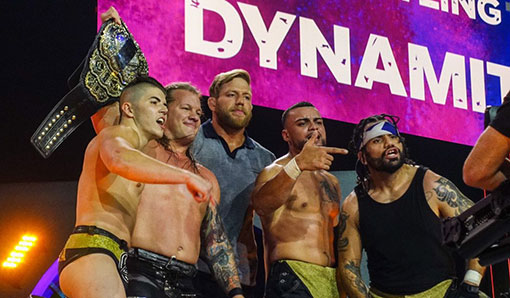 Leading up to October 2, I was actually starting to get excited about the launch of All Elite Wrestling’s new flagship show on TNT, Dynamite.  All-In last year was a pretty good show, and I thought there was some definite potential with Double or Nothing, despite the fact that I felt that the performer/owners spread a little too much agenda into the show, but the wrestling was solid.

I like the idea of there being a solid alternative to the WWE, as I definitely feel that they’ve gotten very stale and more predictable than ever, and the only good shows now in my opinion really are NXT and NXT UK.  And with the WWE, despite the fact that they’ll never admit it, preparing for competition with AEW, by putting the WWE Network original NXT on the cable USA Network, they effectively bone cord-cutters like me who don’t want to have to pay for cable television.

For those not aware, the USA Network’s app does not show any WWE programming, for whatever reason; at least not live.  App users can watch old episodes, back a month or so, but for the intent of watching it live, it’s not an option.  As the arrival of AEW Dynamite approached, I was curious on whether or not TNT’s app would show professional wrestling live, and I was optimistic and pleasantly surprised when I realized that I could watch wrestling on Wednesdays again.

So as I began settling into watch the new alternative, I already began envisioning myself watching AEW regularly, since the WWE still hasn’t figured out what it’s doing with NXT yet, since at first it was one hour on USA, one hour on WWE Network and then it was all hours on USA and fuck you WWE Network, and then in preparation for episode 1 of AEW Dynamite it was entirely on USA with limited commercial breaks (also fuck you WWE Network).

The show starts off with Cody Rhodes versus some guy I’d never heard of before, Sammy Guevara, who actually thought was a woman at first, when he came out wearing like a Pablo Sandoval panda hat, but turned out to be a pretty decent worker.  My first impressions were that I thought it was interesting that AEW maintains that they’re going to keep track of wins and losses, which is hilarious considering professional wrestling is predetermined, so I can imagine the creative walls that AEW will get backed into when they try and push someone who’s like 4-10-3 and try to sell that they’re a contender for a belt and not a jobber with ten losses.

And they’re claiming to have time limits; like old WCW.  I can’t wait to see how flustered fans will become when they start having time limit draws instead of definitive finishes.  I hope fans start pelting the rings with trash like they used to in old WCW.  Speaking of WCW, Tony Schiavone fucked up on two different instances that I bothered to catch and said “WCW” when he clearly was meaning to say “AEW.”  He also called a fallaway slam a blockbuster; making me realize just how much I missed Tony Schiavone and his complete lack of knowledge of professional wrestling moves despite being in the industry for like three decades.