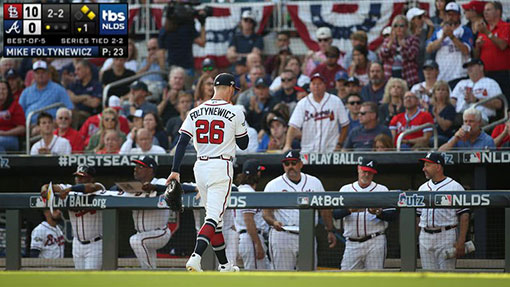 In the shocker of the century, the Atlanta Braves were eliminated in the first round of the playoffs.  For those keeping count, this is like the 5th or 6th time that the Braves dropped the deciding game of the NLDS at home, and somewhere around the 169th time that they’ve failed to make it out of the first round despite making it into the playoffs.

I’m long past the point of where I get upset about it anymore, because I would’ve bet my house that the Braves were going to lose to the Cardinals when the playoff field was initially set.  There’s just something about history, and something about the Braves vs. Cardinals matchup that was a foregone conclusion that another heartbreaking loss to the Cards was all but inevitable, and as much as I would’ve loved to have seen the Braves exorcise the demons of the past and advance, I’m just as satisfied with being right about how the Braves would simply collapse and fall apart – like they always do.

However, this year was a little bit different in the sense that at one point, the Braves actually captured the series lead, when they stole game 3 in St. Louis and for 24 hours, held a 2-1 lead on the Cardinals in the best of 5.  Television was nice enough to do the research for me and explained that it was the first time since 2002 that the Braves carried a series lead in a playoff series, and despite the pessimism, it did birth a sliver of hope that this might be the year that the Braves make it out of the first round.

Naturally, when the Braves squandered their lead in game 4 and inevitably lost in extra innings, I knew right then and there that it was over.  History was just far too strong, and the Cardinals are just one of those teams that are far too charmed, that there was absolutely 0% chance that the Braves were going to win game 5.  Sure, I had hope that maybe they would break the glass ceiling that they erected unto themselves, but the reality was more likely that they were going to choke again, especially when the pitching matchups were set up, with Jack Flaherty going for the Cardinals, and the Braves countering with the once-exiled to Triple-A Mike Foltynewicz.

All I knew was that the Braves were going to win 10-3, or the Cardinals were going to win 10-3, but there was going to be no close game, and it was going to be a blowout.  When the game ended 13-1, I was the last person in all of Atlanta that was remotely surprised at the outcome, and there’s even a part of me that’s relieved that the season is over for the Braves, because I have to pass ScumTrust Park on my commute, and I would no longer have to worry about any future playoff game traffic getting in my way.